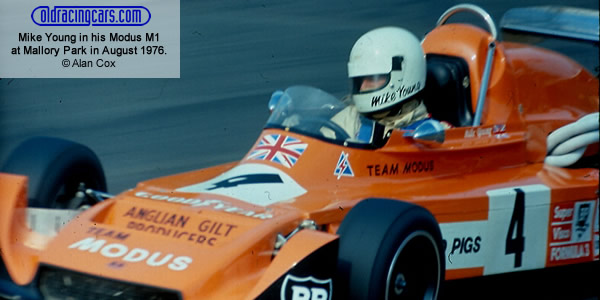 Despite competition from a heavily-financed Formule Renault Europe series in 1975 and 1976, Formula 3 continued to grow in 1976, notably in Italy and Sweden and with the FIA's European Formula 3 series which was done properly in 1976 instead of being an afterthought as in 1975.

John Webb's MCD series had been dropped after 1974, leaving only the BARC series, sposored by BP, in 1975. For 1976, BP's rivals Shell backed a five-race BARC series at Silverstone and MCD also returned to organise a number of non-championship races with good prize money. Rupert Keegan won the more prestigious BP series having made a flying start in his ex-Brian Henton March 743 but then struggled mid-season when trying to replace the old March with a Hawke commissioned by his father and was caught by March works driver Bruno Giacomelli before snatching the title at the last race. The Italian however won the short ShellSport series comfortably. Geoff Lees and Stephen South emerged from the chasing pack as likely future stars.

Thanks to Giacomelli's March 763 and to Keegan's old 743, March dominated the two championships with 12 race wins, the other five falling to the Chevron B34s of Geoff Lees and mid-season convert Keegan. Of the five non-championship races, two very poorly supported races in May were won by Richard Hawkins in Dr Joseph Ehrlich's Ehrlich ES5 and by Brett Riley in a Modus M1 with a Triumph Dolomite engine. Counting podium finishes across all 22 races, March scored 33, Chevron 13, Modus 11 and Ralt 3. The others were split between Barrie Maskell in the 1974 Dastle with two and one each for Dick Parsons in Gary Anderson's updated 1975 Anson, Hawkins in the updated 1974 Ehrlich, Tiff Needell in a fine performance at the final Thruxton in the 1975 Safir and Claude Ciucci in Ian Williams' Supernova SF3 at a non-championship race.

Novamotor's Toyota engine was now dominant with the Ford twin-cam having all but disppeared and the Ford Pinto proving ineffective. Holbay and Neil Brown both turned their attention to the Triumph Dolomite engine but it was not quite competitive with the Toyota. The BMW engine continued to be popular in Germany.

The 1976 results have been compiled by Chris Townsend using the main British magazines Autosport and Motoring News, the French Auto Hebdo and Autosprint in Italy. The BARC Archive has also been immensely helpful and as a result, the only programmes needed are for Zolder 25 Apr 1976, the non-championship race at Silverstone 30 May 1976 and Silverstone 20 Jun 1976.

The top six or top ten finishers are generally known but full results are still needed for many of the races. Most qualifying results are known but copies of practice or grid sheets would be greatly appreciated.

March, Chevron and Ralt chassis records allow a lot of the cars of this period to be identified and it was common for Autosport, Motoring News and Autosprint race reports to mention former owners of second-hand cars. Chassis plate observations by Adam Ferrington and Wolfgang Neumayer of the website www.formel3guide.de have been invaluable.

Autosport adverts as well as its 'Pit & Paddock' and 'Sports Extra' sections add further information on car movements. Modus records may exist somewhere and a copy, even a partial one, would help considerably.