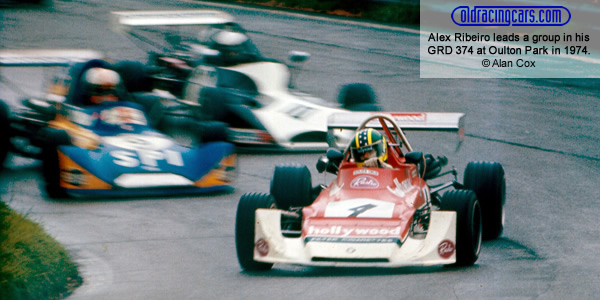 The new 2000cc Formula 3 did not start well. At the opening race, just five F3 cars started and only one of those had a full 2-litre engine, the works March 743 of Brian Henton. Although the Holbay-built ohc Ford 'Pinto' engines in the works Marchs were expected to be the best option, the good old twin cam outperformed expectations, especially the Novamotor versions. Alex Dias Ribeiro had one of these in his GRD 374 and proved Henton's closest competitor in the opening months. Tony Rouff also proved to be quick in his older GRD and both José Espírito Santo and José Chateaubriand picked up good results in their March 743s. Dick Parsons in his ex-works Ensign and Danny Sullivan in a two-year-old March also impressed, Sullivan picking up a works Modus drive towards the end of the year.

Novamotor comprehensively solved the problem of engines in the autumn when they introduced their version of the twin-cam Toyota 2T-G engine, a powerplant that would dominate Formula 3 for many years to come.

With 15 victories, Henton personally dominated 1974, his tally making up the bulk of March's 18 British F3 wins. GRD, through Rouff and Ribeiro, took seven wins and Modus took one: Sullivan's win at Thruxton in October. Counting all podiums gives March a score of 43, GRD 25, Modus four, Ehrlich three, Brabham and Dastle two each and Ensign just one.

The MCD Lombard North Central series ran over 14 rounds and used a 9-6-4-3-2-1 points system with double points at the last race. It should be noted that Jos? Chateaubriand was initially disqualified from second place in that last race but later reinstated. The points table shown here includes his later reinstatement.

Just 13 winners are listed above; the 14th race was a curious affair at Brands Hatch on 26 May 1974 where prize money was not what it should have been and the handful of F3s that turned up were lumped together with a bunch of libre cars. Marcos Moraes' clutch burnt out on the start line so Nicholas van Preussen - also known as Prince Friedrich Nikolaus of Prussia - had an easy win.

The 1974 results have been compiled by Chris Townsend using original period documents, including organisers' results sheets and practice times, and annotated programmes. Reports in the main British magazines Autosport and Motoring News in 1974 were very poor. The BARC Archive has been immensely helpful. We have entry lists for all races but annotated entry lists, perhaps showing non-arrivals, non-starters or extra entries, could be very helpful.

We especially need the Formula Ford grid and full practice times for Oulton 9 Mar 1974 and Brands Hatch 19 May 1974 so we know who the FF runners in the F3 race should have been..

March chassis records and the observations made at the time by Adam Ferrington allow a lot of the F3 cars of this period to be identified. Second hand cars are often identifiable from mentions in Autosport and Motoring News of former owners. Autosport adverts as well as its 'Pit & Paddock' and 'Sports Extra' sections add further information on car movements. Modus and GRD records may exist somewhere and a copy, even a partial one, would help considerably. Any information at all on Ensigns would be greatly appreciated.