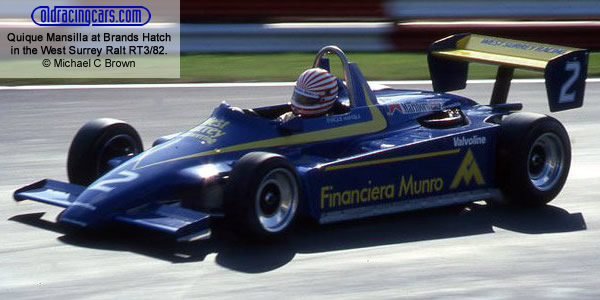 The 1982 season was one of significant transition in F3. March had decided not to build cars for F3 for the first time, ending a successful run of 264 cars over 13 seasons. The new kings of F3 were Ralt who were responsible for three-quarters of the grids in 1982, as well as virtually every place on every podium. Only a Euroracing, a car built from one of last season's March 813 and then dominating the European series, interrupted Ralt's domination.

Winners during the 1982 season included Tommy Byrne of Murray Taylor Racing, who was walking away with the championship before his head was turned by F1, Enrique Mansilla (West Surrey Racing), Dave Scott (Mint Engineering), Roberto Moreno and Martin Brundle (David Price Racing). Byrne returned to the F3 series just in time to snatch the title from the grasp of Mansilla. Scott was third ahead of Eddie Jordan Racing's James Weaver. Emanuele Pirro took Euroracing's win at Silverstone in June and a young Ayrton Senna stopped by to win the November Thruxton.