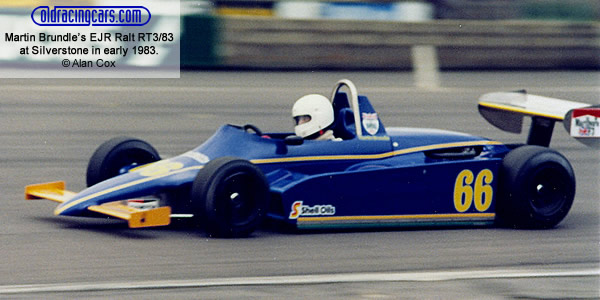 A clash of two future stars, Ayrton Senna da Silva and Martin Brundle, dominated the 1983 season. Senna had won the Thruxton race at the end of 1982 and extended that to a run of ten consecutive victories. Brundle never gave up and his moment finally came in the European Championship race at Silverstone where the Englishman romped to a morale-boosting victory and Senna crashed trying to keep up. Senna was rattled and crashed in practice at Cadwell Park and then crashed three times in the next few six races - each time when he was trying to take the lead from Brundle.

Brundle then beat Senna comprehensively at the penultimate round and took the championship lead by a single point. But at the last round, Senna's Dick Bennetts-prepared Ralt was untouchable, dominating practice and the race to clinch the title. Both drivers were snapped up by F1 teams for 1984, Brundle by Tyrrell and Senna by Toleman.

Allen Berg's 'win' came in the European Championship race at Silverstone where the British runners had to use regulation Avon rubber to be eligible for British championship points. Brundle decided to challenge Senna for overall victory on Yokahama tyres. Berg only finished tenth. Fish's win only came after Senna and Brundle collided at Oulton Park.

Almost everyone used a Ralt RT3. The RT3/83 had been updated with reprofiled sidepods and altered suspension geometry and Ron Tauranac's cars had won 54 consecutive rounds of the British series by the end of 1983. Only David Leslie's unique Magnum 833 and Mario Hytten's unique Sparton SE420 managed top-5 finishes. The engine battle swung back in favour of the Toyota as both Brundle and Senna used the Japanese engine, and Jones and Fish the lighter VW.