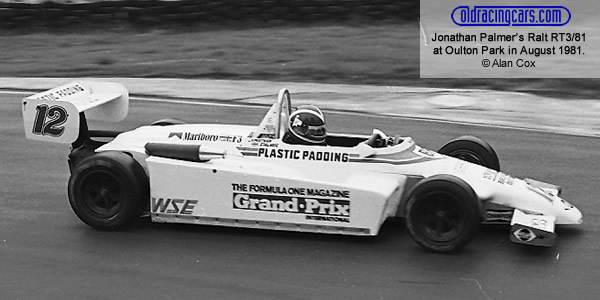 Jonathan Palmer moved up to F3 in 1981 together with West Surrey Engineering, who had run him in FF1600. They bought Stephan Johansson's 1980 championship-winning Ralt RT3 and also obtained the services of Dick Bennetts who had run the car in 1980. After extensive winter testing, Palmer won the first four races and went on to win the title comfortably.

Mike White led the March works team but the March 813 oversteered badly on British spec Goodyears and his competitiveness - and career prospects - waned. Thierry Tassin started in the works Argo JM8 but this new design was a catastrophe and he moved to Neil Trundle's Ralt-equipped team to become Palmer's closest challenger.

Points table from Autosport 19 November 1981 p51 but modified to allow for the disqualifications of Palmer and Moreno at Silverstone on 4 October. Palmer lost his seven points for second place (and fastest lap) but then had to drop one less result, so only lost four on aggregate. Moreno lost his one point for sixth, on top of the 18 points he had already lost as a penalty after his disqualification for fuel irregularities at the British GP support meeting. Other drivers gained points as they were bumped up: Scott to second, Tassin to third, Mike Blanchet to fourth, Leslie two places to fifth, Claus Schinkel two places to sixth, and Boesel who inherited Palmer's point for fastest lap.

All points scorers in the 1981 series used Toyota engines except Mike White who used Novamotor-built Alfa Romeos, the engine that dominated F3 elsewhere in Europe, and Tassin who used a Brabham-tuned Volkswagen engine at the Silverstone race in July. Palmer took maximum points in eight races, the other being the June race at Silverstone which was won overall by Mauro Baldi.