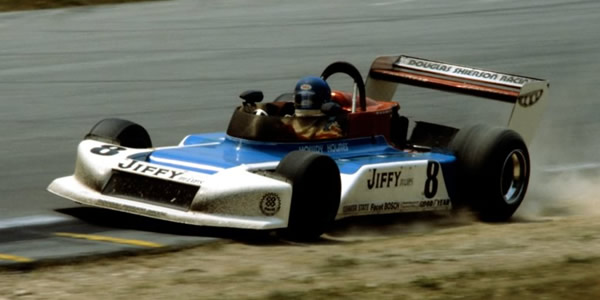 The worldwide success of Atlantic and Pacific led to a FIA-imposed Formula Mondial in 1983, designed to be part of a global formula with regional qualifying series and annual runoffs. The FIA had the authority to impose the new formula but neither the commercial ability nor the focus required to follow through and make it work. Mondial imploded and the planned runoffs were cancelled, which proved a fatal blow to the North American series. Its place was taken by a SCCA-sanctioned series which spread from the west coast of the US to become a national series under the leadership of Vicki O'Connor.

In 1990 it became Toyota Atlantic as the Toyota 4A-GE engine was mandated. The series was integrated into CART when CART bought O'Connor's Pro-Motion Agency Ltd in April 1998, and that same year a spec chassis was introduced, the Swift 008.a. The chassis was replaced with the Swift 014.a for 2002 and then the package was changed to the Swift 016.a chassis with a Cosworth-Mazda engine in 2006. After the collapse of the former CART series, the 'Atlantic Championship' was bought from Kevin Kalkhoven and Gerald Forsythe by Ben Johnston in October 2008, only to be finally cancelled a season later. A new Pro championship started by SCCA Pro Racing ran for a single season in 2012, followed by an "Atlantic Championship Series" run by Formula Race Promotions from 2014 using a dismal assortment of increasingly aged Swifts from the former Pro series, padded out by 2019 with motorcycle engined "Formula 1000" cars. The amateur SCCA class also staggers on with a similar selection of machinery.

The grid below shows the results that have been collated so far.

A series of races were held in Ireland to 1600cc rules in 1967 and this remained a class of Irish racing alongside F2 until the adoption of Formula Atlantic in 1974. Australian National Formula 2 was for 1600cc cars from 1969 onwards, firstly to F2 rules, then for twin-cams and later using single-cam engines such as the VW Golf. Races in South East Asia were generally limited to 1600cc from 1973 onwards until the Macau GP formally adopted Formula Pacific in 1977. After the 1979 season, South Africa moved to Mazda engines and continued with that local flavour of Atlantic until 1985.

All UK, Irish, North American, New Zealand and South African results have been compiled by Chris Townsend with the exception of three early US FB seasons: 1970 by Jim Thurman and 1969 and 1971 by Allen Brown. The Australian Formula Pacific results (1981-84) were also compiled by Chris, the Australian National F2 series for 1974 by Curt Bond and the Japanese Formula Pacific results by Michael Ferner. We are also grateful to Dominic St Jean of the Canadian website AutoCourse.ca for providing original results sheets.

Formula Atlantic started in the UK in 1971, based closely on the successful US Formula B, developed by the SCCA. It was open to production-based engines between 1100cc and 1600cc and, at first, the approved engines were the Alfa Romeo 1600 dohc, BMW 1600 sohc, Datsun 1600 sohc, Fiat 124 dohc, Ford 1500/1600 pushrod, Lotus Ford dohc (i.e 'twin cam'), Porsche 1582 pushrod and the Ford-Cosworth BDA. The BDA, homologated for Group 2 at 1601cc, would need to be reduced in capacity but would quickly prove to be the dominant engine. Formula B didn't allow the four-valve BDA but did allow fuel injection, which the UK didn't, so the Ford twin-cam dominated in the US and Canada until Formula Atlantic rules were adopted in 1974.

As initially designed, the formula specified a maximum of five gears, minimum weight of 968 lbs and maximum fuel capacity of 15 gallons. It was aimed to sit between F2 and F3. (Source: Autocar 17 Dec 1970 p23)

A very similar Formula Pacific later emerged in New Zealand and Japan but Australian Formula 2 stayed with the Lotus Ford twin cam. Ireland adopted Atlantic in 1974 but prior to that had Formule Libre (also known as Formula Ireland) with two classes, one to 2000cc and one for 1600cc twin-cams (source: Motoring News 9 Dec 1971 p10). In South East Asia, the Singapore and Malaysian GPs specified 1600cc twin-cam 8-valve engines (i.e. excluding the BDA) whereas that year's Japanese GP allowed free design engines up to 2000cc (source: Motoring News 13 Apr 1972 p26).

Note that the Lotus-Ford dohc engine is referred to throughout this site as the Ford twin-cam, the name by which it was usually known in period. Based on the Ford 116E pushrod engine and originally designed by Harry Mundy as a 1498cc engine for the 1962 Lotus Elan, it was increased to 1558cc to fit into the new 1600cc sports car racing class. It was used in single-seater racing cars as early as 1963 and was one of the spurs to the creation of Formula B in 1965. In August 1970, Ford were still providing batches of LAA blocks, the only major part of the engine made by Ford, to Lotus to continue manufacturing the twin cam engine.

The definitive Formula Atlantic version of the BDA was the BDD and this was the sole engine for use in the US WCAR/ECAR series until Toyota took over the series in 1989 and introduced their 4A–GE engine.