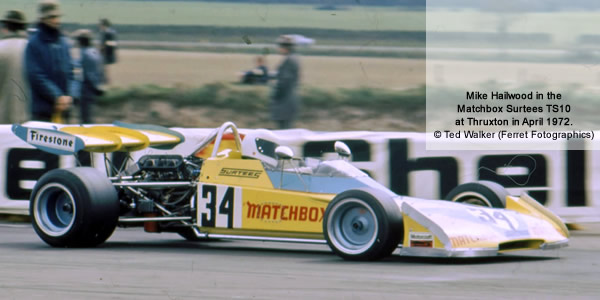 Formula 2 was still open to graded drivers who were ineligible for points, so the driver winning each race was not necessarily competing for the championship. Emerson Fittipaldi, with three wins from the five races he entered with his one-year-old works Moonraker Lotus 69, was the quickest driver present, which was no surprise as he was also on his way to the World Championship. Ronnie Peterson also made guest appearances in a works STP March 722, and won at Thruxton. Ignoring these two, the quickest drivers were Mike Hailwood and Jean-Pierre Jaussaud. Hailwood benefited from the well-financed and well-engineered Matchbox Surtees TS10, and took a well-deserved championship, but Jaussaud, at 36 hardly a budding F1 talent, did particularly well to win two races in a customer Brabham BT38 run by Adam Potocki's under-financed operation.

Also worth mentioning are the 22-year-old Austrian banker's son Niki Lauda who was let down by engine trouble in his works STP March; David Morgan who did remarkably well in a private Brabham; 21-year-old Jody Scheckter who impressed in the sole works McLaren and was tipped for stardom; Peter Gethin, still somehow ungraded despite his wins in F1 and F5000, who raced the new Chevron B20; and Brazilian Carlos Pace who combined his Williams March F1 ride with impressive F2 drives for Pygmée and later Surtees.

John Player sponsored a series of races in Britain. The title was won by STP March works driver Niki Lauda.

Points were awarded on the normal 9-6-4-3-2-1 basis, with the final round scoring double. Championship table from the John Player Motorsport Yearbook 1973 p302

Brabham's latest F2 design was the monocoque Brabham BT38, and this was the most successful car of the season in terms of wins and of points scored, but only narrowly. March's new side-radiator 722 was not as successful as the 712M but still sold in very large numbers. Surtees produced their first F2 design, the Surtees TS10, and this was immediately successful in the hands of 'Big John' and Hailwood. Derek Bennett at Chevron had another go at F2 and turned out the boxy Chevron B20 with its distinctive full-width nose. Gethin led every lap to win at Pau in this car and although reliability let it down elsewhere, customer orders were expected for 1973. With the John Coombs' ELF-backed team more focused on the March 722 than the spaceframe Alpine A367, France's only competitive runner was Pygmée, built by Patrick Dal Bo's operation in France but run from England by Mike Earle, formerly of Church Farm Racing. The car went well but the Pygmée-built engines did not work, and tensions between the French and English wings led to Carlos Pace's departure and the team's collapse. McLaren re-entered F2 with the new M21 but despite young Scheckter's exploits, orders for the Trojan-built 1973 version did not materialise. GRD, made up largely of ex-Lotus staff, sold a few F2 cars but their real successes came in F3. Allan McCall's well-engineered Tui did well but McCall did not have the resources for F2. Lotus's sole representative was Emerson Fittipaldi in his modified 1971 Lotus 69 with Cosworth BDF engine.

The engine formula changed to 2000cc in 1972 and, as usual, it was Cosworth's preparation of a Ford engine that worked best. Cosworth were able to stretch their BDA engine out to 1927cc but only built four of the expensive BDF engines, one each for Brabham, March, Lotus and McLaren. When they weren't breaking, those few units won six races in 1972. A smaller 1800cc Cosworth BDE was also available, with around 260 bhp instead of the BDF's 290 bhp, and a host of smaller engine tuners prepared BDA engine of various capacities, some reaching 1973cc by late in the season. The tuners that emerged with the greatest credit were: Brian Hart, who supplied his reliable 1850cc units to the ELF Coombs team and to Team Surtees; RES, whose 1927cc unit was the engine of choice in June and July; Racing Services who supplied engines to Rondel; David Wood, who turned out a few quick 1860cc engines and was the first to build a full 1994cc engine; and Alan Smith whose partnership with Chevron in 2-litre sportscar racing led to him producing some impressive 1900cc BDAs for Chevron's F2 team. Not everyone got it right. Felday's 1973cc engine was a huge disappointment. Rondel experimented with their own 1960cc unit but that wasn't seen often. Novamotor built 1800cc and 1840cc BDA and BDE engines for general sale but they were not a great success. Other 1800cc BDAs were produced by Broadspeed for Hiroshi Kazato, by Geoff Richardson for Richard Scott, and by Tony Steele for Tom Belso. The alloy block Ford BDA engine based on the Hart block was homologated on 1 October, so was too late for the European season, but RES and Hart had their alloy block mills ready for the F2 Torneio Brasiliero in October and November.

The 1972 Formula 2 results data displayed here is based on a database of results constructed by Rob Ryder and kindly provided to OldRacingCars.com. Rob's main sources were the two British weekly publications Autosport and Motoring News, plus the Formula One Register's "Black Book" for this period, 'A Record of Grand Prix and Voiturette Racing Volume 9' by Paul Sheldon and Duncan Rabagliati. Chassis identities were stripped from this data and reconstructed by Allen Brown using the research into individual marques and models which appears elsewhere on this OldRacingCars.com.

If you have any additions, corrections or comments, please contact Allen (allen@oldracingcars.com).