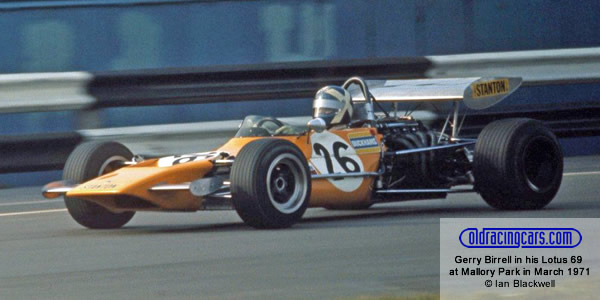 This was the season that the monocoques took over F2. March swapped to monocoque construction for their all-conquering 712M, joining Lotus, who continued their 69 design, and Pygmeé. Chevron, Lola and De Tomaso built new monocoque designs during the 1971 season leaving just Brabham and Tecno who preferred their successful spaceframe designs. The monocoque designs won 17 races; the spaceframes 8. In a remarkable turnaround from 1970, more Marchs started F2 races in 1971 than Brabhams. Lotus and Tecno were the next most numerous.

The championship was won by Ronnie Peterson in a March 712M but Emerson Fittipaldi was almost as quick in his Lotus 69. François Cévert had speed but not enough reliability from his works Tecno and, to complete the variety, Carlos Reutemann finished second in the championship in his Brabham BT30 and BT36 and would have won a title based on all 25 races.

All the main runners used Cosworth FVA engines except Quester who had a factory BMW engine, and the works Tecnos which used BDA engines.

Of the other five championship races, three were won by Emerson Fittipaldi and one by Graham Hill, both being graded drivers and thus ineligible for points. Maximum points in those races were awarded to Peterson, Quester, Schenken and Reuteman but these are not included in the win totals above.

A four-race series was held in Brazil in October and November.

The 1971 Formula 2 results were collated by Chris Townsend using Autosport and Motoring News as his primary sources. Additional information was taken from Sport Auto. Individual car identities are based largely on the chassis number observations in the two UK publications and in Eddie Guba's Motor Sport Annual 5, plus extensive additional research.