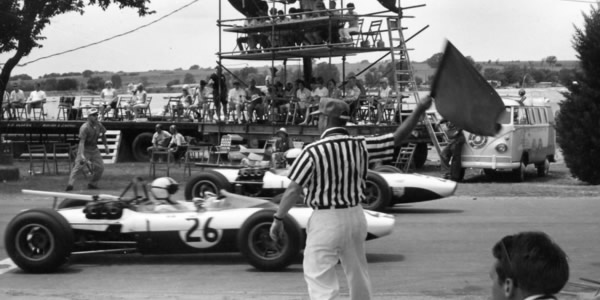 When Formula Atlantic traces its lineage, that story irresistibly leads back to the birth of Formula B in 1965. The Sports Car Club of America had organised a class for Formule Libre racing cars in 1964, having previously had an ad-hoc class for "Unlimited" single-seaters. With the demise of Formula Junior at the end of 1963, the cars appearing in Formule Libre were in three broad groups: big "specials" using a variety of large American engines in generally unsuitable European chassis; modified Formula Juniors using 1500cc or 1600cc Ford push-rod or twin-cam engines; and finally largely unmodified 1000cc or 1100cc Formula Juniors. For 1965 "Formula SCCA" was invented to put a bit of structure on this growing area with three new classes: Formula A for the big specials but limited to 3-litres and allowing full race engines; Formula B for the 1600cc production ("stock-block") engines and Formula C for 1100cc racing engines to mop up the old Junior cars.

Thanks to the availability of the new Vegantune-supplied Lotus-developed Ford Twin Cam engine in 1598cc form, Formula B boomed and dominated the larger but hamstrung Formula A until the latter was allowed to use 5-litre stock block engines in 1968. A professional Continental Championship began for Formula SCCA in 1967 and a 'Pro' series for Formula B continued until 1972. A parallel Canadian series boomed in the early 1970s before changing its rules to Formula Atlantic, a UK-born derivative of FB, for 1974. SCCA Formula B followed the Canadian series in 1975, allowing in the BDA engine, but only with iron block, standard valves and carburetors.

Formula B continued as an amateur equivalent of Formula Atlantic until 1978, at which point the failing Formula A was merged into 'A' Sports Racing, a merger triggered by the single-seater Can-Am's absorption of F5000 at professional level. FB was still thriving but without a "Formula A" to make sense of its name, it was renamed Formula Atlantic and abbreviated to "FA". Also FC was merged with Formula Super Vee, named "Formula Continental" and abbreviated to "FC". So the FA of 1979 was quite different to the FA of 1978. In the northwest of the continent, the ICSCC continued with Formula B until 1981, with the BDA-engined cars having to run as FAs. In 1982, the top two ICSCC formula classes were changed to be F/Atlantic and F/Libre, with the latter absorbing FB as well as F5000, Formula Continental and FSV.

From 1967 onwards, non-championship races are shown in brackets.

The results here have been compiled from reports in Competition Press & Autoweek, the main US motor racing publication of this era. Some SCCA results sheets have been made available and a few entry lists have been contributed.

Many of the results are incomplete: entry lists, results sheets, details of non-starters, grid sheets or details of qualifying are needed for a number of races. These are detailed in the individual season pages.

The rules for allowing the BDA are often queries. The comment here is from the 'What's Legal' column of Pit Talk magazine Jan-Feb 1974 p2.

Chassis identification is patchy. What we have is largely from details of previous owners of second-hand cars (typically F2 cars which have been identified from F2 reports), surviving SCCA log books and constructor production records for March, Chevron, Lola, Royale and Lotus. Brabham records do exist for this period and copies would be greatly appreciated.