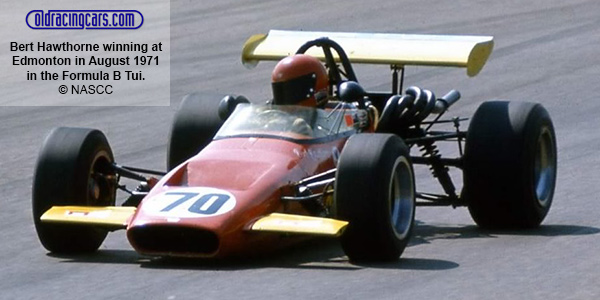 The 1971 FB season saw a fabulous battle for the title between Alan Lader, the previous year's runner up, in his Brabham BT29 and Kiwi Bert Hawthorne in the Tui, a one-off Formula 3 car that had been converted to Formula B by its builder Allan McCall. Lader won the opening two rounds, the second only after the stewards needed to review the video of the race the check the results. Hawthorne then took over with a flag-to-flag win in Mexico City after Lader crashed on the opening lap, writing off his faithful Brabham BT29. Fred Opert supplied a new one but Lader couldn't stop Hawthorne winning from pole at Edmonton and Brainerd. However, the Brainerd victory had been snatched at the very end after Freddie Van Buren had led almost the whole race in his Chevron B18.

The points Lader had accumulated put him five points ahead going into the last race at Road America and he also had a new car, the latest Brabham BT35. The Kiwi led yet again with Lader back in third but after seven laps, Hawthorne was off the track, his brakes having failed, and Lader cruised home to win his third race of the season and the overall title.

The championship table was constructed from results after Competition Press & Autoweek's end-of-season review (CP&A 1 Jan 1972 p10) showed that the usual 20-15-12 points system was in use.