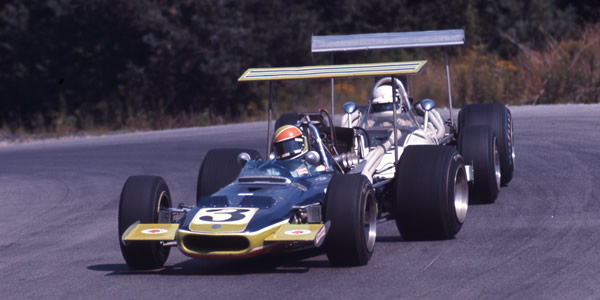 The SCCA's Formula 5000 championship ran across North America from 1968, when it was called Formula A, to 1976, when it was repaced by the Single-Seater Can-Am. It grew steadily from 1968 to its peak in 1973 and 1974, after which there was a slight decline due to disagreements between the SCCA and rivals USAC, and the inability of anyone to produce a car as good as the Lola T332. There were some wonderful duels through this period: Jody Scheckter versus Brian Redman in 1973, then Redman versus Mario Andretti in 1974 and 1975.

The most successful years of the series are associated with L&M - Liggett & Myers Tobacco Company. To a 21st century audience, it must seem strange that so much of motor sport was financed by companies selling a product that was both addictive and known to be carcinogenic, but this was, as is so often said, another age. In the US, Congress banned cigarette advertising on TV and Radio in 1971, so the travelling billboards of motor racing became increasingly important. To survive, smoking had to be seen as cool, and Formula 5000 was the epitomy of cool. Such was the success of L&M and other producers that smoking rates in the US continued to rise, peaking in 1973, L&M's final year as F5000 sponsor. According to the US government, more than 16 million Americans are living with a disease caused by smoking.

Not all the results are complete: entry lists, results sheets, details of non-starters, grid sheets or details of qualifying are needed for a number of races. These are detailed in the individual season pages.