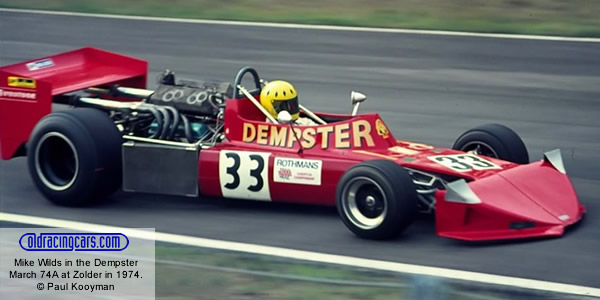 The 1973 series had started well and ended well, and the rather soggy middle had been forgotten by the start of the 1974 season, with F5000 now seen by the press as having "come of age". 1973 had also whittled down the number of constructors, with most competitors buying Lola's new Lola T332, leaving Chevron, March and Trojan struggling to find a single customer, and McRae closing its production capability and selling its factory to Penske. Reigning champions VDS and driver Teddy Pilette stayed with Chevron and bought two new Chevron B28s, the second for new Tasman champion Peter Gethin. The Lola T332 drivers included Bob Evans in McKechnie Racing's car with Henley Forklift backing, and Guy Edwards in John Butterworth's Embassy-backed example. The Dempster team was March's only customer for the March 74A, and Mike Wilds started the season strongly in his example before the team faded away. A single Trojan T102 was bought by Ian Ward Racing for Keith Holland to drive, but this made no impression.

As usual, the start of the season was enhanced by drivers who were planning to do the US series, and two early races were won by David Hobbs in his Hogan Racing Lola T330, and Brian Redman guesting in Sid Taylor's Lola T332. Hogan left the older T330 in Europe and Hobbs won two races when his US commitments allowed. Once they'd gone, Gethin won three of the next five from Evans, and these two took over the championship lead. Evans then took the next three races, but the championship battle between these two became submerged as first Vern Schuppan in Taylor's Lola T332, then Tony Dean in his well-used Chevron B24, and finally Ian Ashley and Tom Belso in old Lola T330s won the next four races. Guy Edwards then returned from injury to win the penultimate race, before Schuppan reappeared to win the finale in a third VDS Chevron. The handling of Gethin's Chevron B28 had gone backwards during the season, and Evans was able to hold on to his points lead and win the title.

One of the most interesting new features seen in 1974 was Ford's 3.4-litre Essex V6 engine, better known as the Cosworth GAA, which was now eligible for F5000. This was smaller and lighter than the Chevrolet, lending itself to more agile cars, and was fitted to a F3 Modus as an experiment by Tom Walkinshaw. More would be seen of the powerplant in 1975.

The British Formula 5000 results have been compiled by Chris Townsend using the main British magazines Autosport and Motoring News, plus results sheets and annotated programmes.