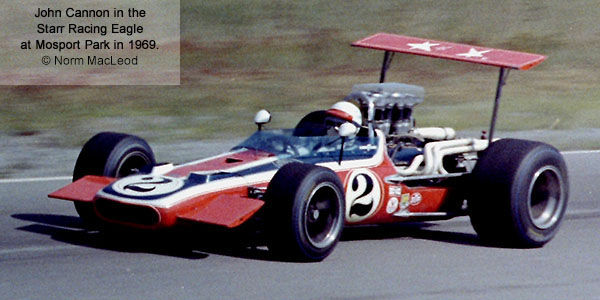 AAR sold ten more Eagle Mk 5s for the 1969 season, and Tony Adamowicz took Milestone Racing's example to a narrow championship victory. Sam Posey was his main challenger for most of the season, and would have ended closer if he hadn't wrecked one Eagle and lost a second one in a transporter accident. In July, Peter Gethin and David Hobbs transferred over from the British series in works McLaren M10A and works Surtees TS5 respectively, and this British invasion were greeted by Posey saying "they're going to be annihilated" and he was "going to blow the doors of them". Gethin took pole position at his first two races, and after electrical problems ruled him out at Road America, he won easily at Lime Rock, with Hobbs second and a chastened Posey lapped by both of them. Hobbs then took over, winning from pole at Donnybrooke and later repeating that performance at Mont Tremblant and Thompson. He took his fourth win at Sebring in December to end the year just a single point behind Adamowicz, who would prove to be the last American to take the F5000 title. Lotus and Lola both had their new 1970 cars at Sebring, and Gus Hutchison brought his F1 Brabham BT26 into second place behind Hobbs. Prospects for 1970 were excellent.

The points table is derived from Wolfgang Klopfer's excellent Formula A and Formula 5000 in America p20 with one modification: the addition of Jon Ward who should have got two points for fifth place at Sears Point in June. Note that Jo Bonnier did not get points for his third place finish at Sebring at the end of the season with Kroll (fourth) and Morley (fifth), Bouverat (sixth) and Brockman (seventh) getting one point more. This is because Bonnier was running on an FIA licence, not a SCCA licence.

The 1969 US Formula A results were collated by Chris Townsend using reports from Competition Press & Autoweek. Further information has been added from entry lists, qualifying sheets and results sheets. Wolfgang Klopfer has been a tremendous source of information on this series.

Just one program for 1969 is still needed: the Colorado Grand Prix at Continental Divide on 8 Jun 1969.