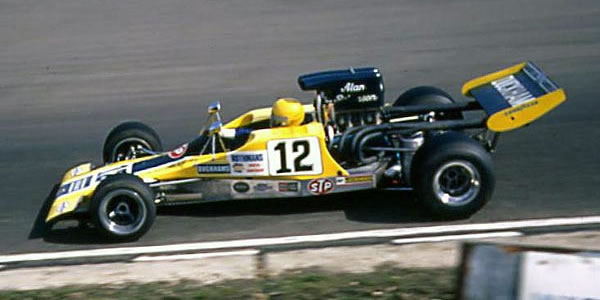 The SCCA's lucrative L&M Championship proved a very tempting lure in 1972 and two of the British series' leading runners, Graham McRae and Brian Redman, spent much of the summer in the US. McRae had enough funding to keep a second McRae GM1 in the UK so was able to fly back and forth enough to win the US championship and also remain in contention for the European title. Sid Taylor's team had no such luxuries and driver Brian Redman missed four of the 13 European races. Redman returned his Chevron B24 to England with two races to go to find Gijs van Lennep with a 13 point lead in his Surtees TS11. Alan Rollinsons' Lola T300 was in third place, just ahead of new US champion McRae, who tended to either win or break. The penultimate race was won by McRae with Rollinson in second after Redman, who had dominated practice, retired. That left van Lennep with a very healthy lead but the final race at Brands Hatch carried double points so any of the four could still win the title. Redman again dominated practice, followed by Frank Gardner in the brand new Lola T330 and then McRae, van Lennep and Rollinson. The race was a battle between season-long rivals Redman and McRae, the two both lapping in 44.0s, a new record, but the Chevron driver held out to win by just 0.2s. A lap adrift, van Lennep repeatedly blocked off Rollinson's overtaking attempts, for which he later apologised, but his fourth place was what he needed to be sure of the championship, regardless of the battle for the lead.

So Surtees won the F5000 championship to go with Mike Hailwood's F2 title, McRae's run of championship titles finally ended, and Redman finished the year empty handed. Van Lennep would defend his title in Europe but McRae and Redman would renew their rivaly in 1973 in the US series. Curiously, champions Surtees never sold another F5000 car and although both McRaes and Chevrons sold well in 1973, it was the Lola T330 that had quietly finished third at Brands Hatch that would outsell them all.

The British Formula 5000 results were compiled by Chris Townsend in 2002 using the main British magazines Autosport and Motoring News. We now have programs and qualifying times for every race of 1972 but please get in touch if you can help with the hunt for other F5000 programs or are able to provide any original results sheets.