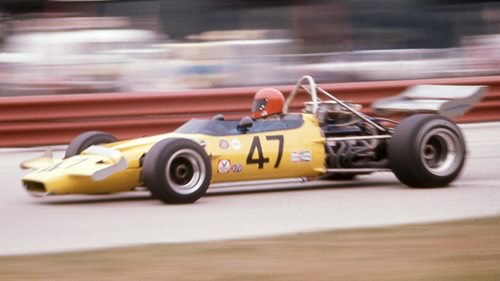 Evan Noyes in his new McLaren M18 at Road America in 1971. Copyright Richard A Reeves 2013. Used with permission.

After McLaren had won each of the first two seasons of British F5000, much was expected of the 1971 McLaren M18. It proved a disapointment, with well-developed M10Bs proving quicker.

The first M18 appeared at the Racing Car Show in January 1971.  It followed the basic layout of the McLaren M10 series, which had been based on the McLaren M7A F1 car, and was therefore very different to both the F1 M19 series and the revolutionary Indianapolis M16 series.  The most significant change from the M10 series was that the monocoque stopped behind the driver's seat, with the Chevrolet engine being used as a stressed member.  Despite the car's early appearance, very little testing had been performed in the prototype, and Brian Redman, driving the car for Sid Taylor's team, had problems with it at first.  His main rivals were Mike Hailwood in the works Surtees TS8, and Frank Gardner in the works Lola T192, and it was Hailwood who won the opening round with Redman second.  Redman then took pole position at Snetterton, but finished second to Gardner, before taking his first win in the third round at Brands Hatch.  At that point, all looked well, and several more M18s were sold.  Peter Gethin and Derek Bell stood in for Redman when he had other commitments and kept up the momentum, but it was increasingly clear that Surtees and Lola had caught up with McLaren, if not overtaken them.  This perception was only enhanced when Graham McRae won two races in his heavily developed M10B.  Lola were outselling McLaren, especially in the US.  McLaren's initial answer was half-hearted, a M18/M22, and when the real M22 did appear, it was an unmitigated disaster.

Eoin Young's book does not say how many M18s were built but records from a component supplier show that coil/shock units were supplied for M18 500-01 to 500-08. As well as these eight, it looks like another two were built up later using spare tubs. Three of these were destroyed leaving seven to find. So far, six have been traced, leaving just the Wietzes car to be found.

My thanks to Marcus Pye, Ted Walker, Jaime Gard, Don O'Sullivan, Duncan Fox and Chris Townsend for helping me assemble this puzzle and to Ted and Duncan again and also Al Moore, Jeremy Jackson and Stuart Dent for permission to use their pictures. All and any further help would be gratefully received. Please email Allen at allen@oldracingcars.com if you can add anything. 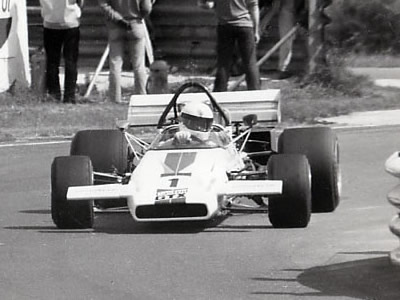 Brian Redman in the prototype M18 at Thruxton on 1 Aug 1971. Copyright Robert Clayson 2005. Used with permission. 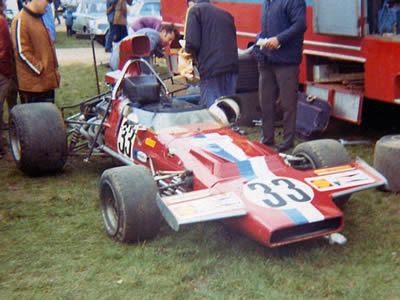 The car was then returned to McLaren and updated as the M22 prototype. Raced in the 1972 Tasman series by David Hobbs where it was first called "M22" and then "M18B". Hobbs won the final round of the series, at Adelaide on 27 Feb. The car then returned to Europe to act as the basis of the "real" M22 built for VDS in time for the UK season. Racing Team VDS for Teddy Pilette UK 1972 until May when it was replaced by the first Trojan-built production M22. Advertised by Trojan Racing Ltd May 1972.

It would seem that this car was then sold to Don O'Sullivan (Western Australia) and his mechanic Jamie Gard and shipped to Australia in time for the November 1973 Australian GP where Howie Sangster drove it for the O'Sullivan team.

The 'M22' had been bought with the intention of stripping it to build a 5-litre sports car but it appears to have survived intact and was sold to Chris Milton for the 1975 Tasman series. He raced it again in the 1976 Australian Internationals and again at Winton In November that year.

To Alan Newton (Melbourne, Australia) and raced in the 1978 Australian Internationals (Sandown Park and Surfers only). Retained by Newton 2012.

Built for 1971 season and entered by Team Trojan for Graham McRae in the British series. This may be the record holder for the shortest-lived F5000 car. McRae's first appearance was at the Snetterton race on 9 April, but in unofficial practice on the Thursday before the race, he went off sideways at Russell. The McLaren hit the bank, flew up into the air and landed almost upside down, before rolling back onto its wheels. McRae was lucky to be uninjured but the car was destroyed.

Unknown. Most likely the Wietzes car. 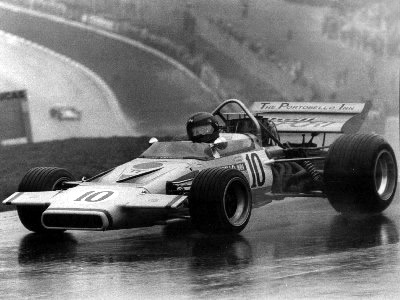 Built for 1971 season and sold to Howden Ganley and backer Barry Newman for the UK F5000 series. Ganley was racing for BRM in F1, so the car was first raced by Ganley's future Tiga partner Tim Schenken at Snetterton on Good Friday, then by Ganley at Brands Hatch, Castle Combe and Mallory Park. Also driven by Jean-Pierre Jassaud in the Silverstone International Trophy and at Thruxton in October. Entered by Speed International Racing in the 1972 UK series for Ray Calcutt until July. Then taken over by Tony Lanfranchi with backing from Sheridan Thynne for the last few races of 1972.

Rebuilt over the winter by Tony Trimmer, and raced by him in 1973 until he was injured in September, after which it was hired out to Jac Nelleman, Arie Luyendijk and Bernard Bird. Returned again in 1974 run by Trimmer and with backing from Ronnie Scott, and hired out to Boy Hayje at Zandvoort, and hired by MCD to John Stevens for three races at Brands Hatch. In all three recorded races, Stevens crashed the car, his most impressive being when he was practicing starts by the grandstand and put into into a bank.

The car was retained by Ganley "for many years, in a rough state until sold to CJ 'John' Hewett (Saul, Gloucestershire), Spring 2001". Raced by Hewett at the Loton Park Hill Climb May 2013, at Shelsley Walsh June 2014, and at Prescott October 2015. 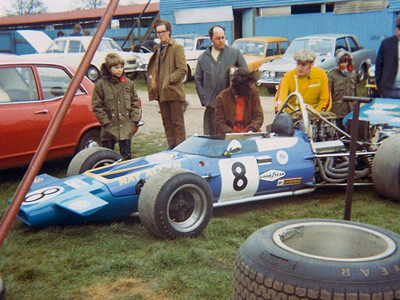 Entered by Cowell at Shelsley Walsh August 2005. Still owned by Cowell in September 2016.

This series of accidents resulted in two cars, one built from one of the original monocoques (see "500-06(A)") and one from a new monocoque together with all the surviving components bought directly from Lader's team (see "500-06(B)").

Wes McNay and Henry Alexander owned an M18 monocoque in 1990, when it received a Verification Statement from Peter Agg's Trojan identifying it as chassis 500-06. At the time, it was only a tub with some spares, and the route it took from Lader to McNay has not been explained. When the car was sold to New Zealand, it was found to have the livery from when Lader raced it in 1972 and damage to the front left corner so this is presumably the discarded tub from the Watkins Glen accident. If so, this would be the second of four tubs to have been used in 500-06 during its life.

Nothing more known until December 2009 when a "restoration project" was advertised on racecarsdirect.com by Mike Walters (UK). The still unrepaired tub was sold to Paul & Chris Radisich (Auckland, New Zealand) in 2010 and reskinned on the left side. At this stage the project consited of the monocoque, two original nose cones, two original rear wheels, and an assortment of new components. In August 2013, the project was sold to Rob Ward (Tauranga, New Zealand). Still with Rob in November 2018.

New Zealand McLaren expert Duncan Fox has spoken at length with Gary Pederson (New Zealand) and Pederson reports that he purchased the entire crashed but disassembled (ex-Lader) car complete with a brand new Trojan tub from Evan Noyes. They left all the damaged unusable components in the US (including the crashed tub) rather than pay duty which was 68% in those days. Pederson built up the car in time for the 1974 Tasman series. Crashed at Adelaide (24 Feb), damaged and not raced again. It was described as either a McLaren M18/22 or a McLaren M18C, but was called "M18 03" by Pederson as it was the third car he had built.

The damaged car passed to Kelvin Cameron (Christchurch, NZ) who used parts to build a "Datsun 180B" for New Zealand's Open Saloon Car Association (OSCA) series. The car was powered by a fuel-injected 355ci Chevrolet V8. Unfortunately, not long after the car was completed, Cameron was fatally injured in a testing accident at Ruapuna. The tub and other components were sold by his widow to George Sheweiry, who planned to build a De Tomaso Pantera Sports Sedan. When that did not come to fruition, Sheweiry sold the M18 to his cousin Peter Benbrook (Auckland, New Zealand) some time before 1991. Sheweiry reported in June 2017 that Benbrook still had the car.

The following M18s are not yet fully explained. 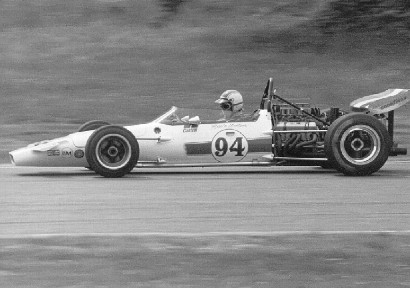 Eppie Wietzes in his McLaren M18 at Laguna Seca in 1971. Copyright Al Moore 2002. Used with permission.

Entered by Formula Racing for Eppie Wietzes (Thornhill, Ontario, Canada) in the 1971 series, appearing at all eight rounds. He finished second at Brainerd, and had two other podium finishes. Wietzes bought a Lola T300 for 1972, but the McLaren was not sold, and was advertised by Wietzes as late as 2 Dec 1972. According to Duncan Fox, the M18 was sold to Bill Jongbloed (Santa Ana, CA), but Jongbloed has not said where it went next. Jongbloed kept the chassis plate as a souvenir and told Fox that it says 500-02. Subsequent history unknown but may be the Dwight Zillig car. 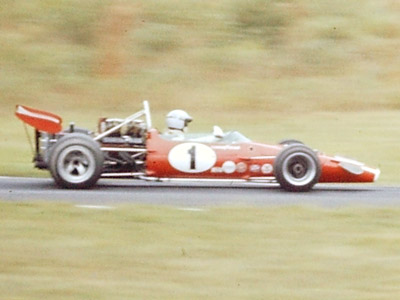 May be 500-07. Originally built for Graham McRae to replace the car crashed at UK R2. Unraced as Trojan "released" McRae and sold to Lothar Motschenbacher US 1971 (from Edmonton 1 Aug). Again in US 1972 but not seen after Road Atlanta 20 Aug 1972. "Crashed nastily in the rain at Atlanta" (Autocourse 1972-73 US review p151). It is possible that this car was destroyed in the fire that destroyed Motschenbacher's garage on Thanksgiving Day, late November 1972. Duncan Fox has been working hard to determine the fate of this car and is now satisfied that the tub was dumped although some parts from the car may survive somewhere. Some parts were reported to be in Los Angeles in 2002.

May be 500-08. Don O'Sullivan (Australia). Bought new from McLaren to replace O'Sullivan's M10A crashed at Teretonga. First seen at Mallala 11 Oct 1971 with Repco-Holden V8. Raced at 21 Nov 1971 Australian GP. Entered in the 1972 Australian Tasman rounds but DNA. Next seen at Surfers Paradise 27 Aug 1972 (raced by O'Sullivan) then at Symmons Plain 24 Sep (DNA but described as McLaren M22) and Adelaide 8 Oct. Raced by Howie Sangster for O'Sullivan from Warwick Farm 5 Nov 1972 (DNS). Not entered in 1973 Tasman series. O'Sullivan then bought an ex-Teddy Pilette M22 from VDS and the M18 is not seen again. Jaime Gard recalls it being reduced to a bare tub to contribute parts to the Gardos F5000 and then sold with the McLaren M22. However, M18 bulkheads have been found in the Gardos so it would appear than the M18 was completely consumed. 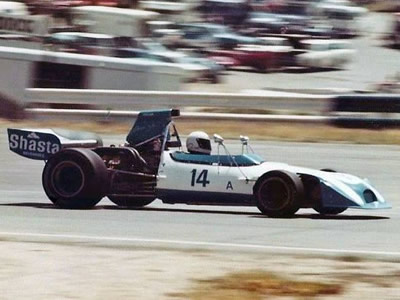 Dwight Zillig in the Shasta-backed McLaren M18 at Laguna Seca some time between 1974 and 1977. Copyright Vincent Puleo 2016. Used with permission.

Dwight Zillig (Novato, CA) raced a McLaren M18 in SCCA events in northern California between 1975 and 1977. He entered a white #14 Shasta Beverages McLaren at Sears Point in September 1975, and this is presumably the same car he races through these three seasons. He raced a few times a year in the car, in San Francisco Region Nationals and Regionals at Sears Point and Laguna Seca. His last known appearance was in the "Sears Point Summer Nationals" on 14 Aug 1977, where he crashed during the Saturday morning activities. 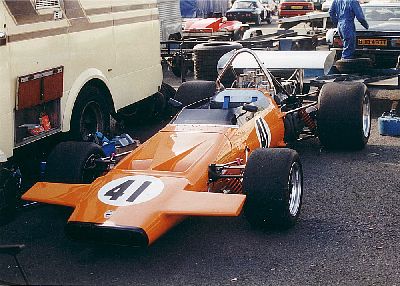 "Unused M18 F5000 monocoque" advertised by Ian Webb in Feb 1984. Subsequently with other M18 parts to Paul Lanzante; later built up (believed to be by Tony Steele) for Roger Ealand (Maidenhead, Berks, but now back in Australia - then orange); then sold to David Coplowe in white livery, then to Frank Lyons (Felsted, Essex) painted red with dark green stripe about 1999. 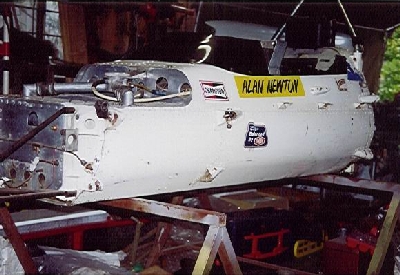 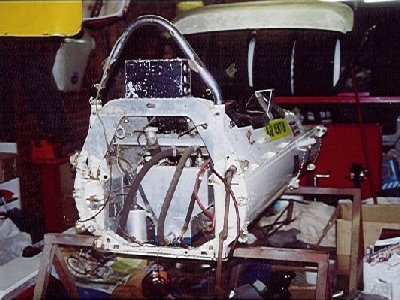 A new car, still at Trojan, was advertised by Kirk F. White (Ardmore, PA) in Autoweek 24 Jun 1972. Could this be the source of the new tub used by Lader after his Watkins Glen accident?

Some sources show Tom Jones racing a McLaren M18 in the US in 1974; this is thought to be his McLaren M22.