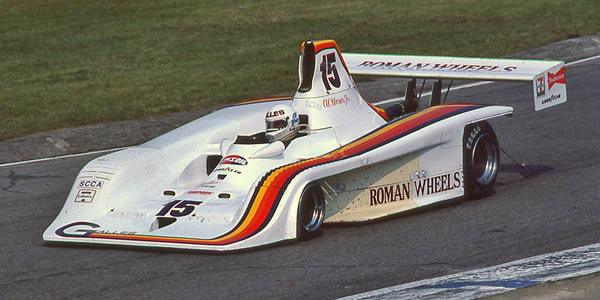 The original Can-Am, rightly regarded as one of the high points of post-war sports car racing, collapsed in 1974 after two dismal seasons. It had been largely eclipsed over those two years by the Formula 5000 series, also organised by the SCCA (Sports Car Club of America) but catering for 5-litre single-seaters. The F5000 series continued to draw some of the biggest names in racing but also stagnated in the mid-1970's, partly due to its domination by British manufacturer Lola.

The SCCA thought they could fix the problems of F5000 and also revive the much-missed Can-Am by effectively combining them. They scrapped F5000 and introduced a new Can-Am for 5-litre single-seat sports cars. So everyone slapped a sports car body on their F5000 Lola and continued as if nothing had happened. The first couple of seasons were a bit shaky but the series blossomed in 1979 and had three great years with landmark cars such as the Lola T530, the March 817, the VDS and the Frissbee.

In 1982 and 1983, CART emerged as the new pinnacle of road racing in the US and the better Can-Am teams moved over to CART, triggering a rapid decline in the fortunes of Can-Am. By 1983 it was already becoming a mere ladder series and its last three years, 1984-1986, saw it become little more than club racing.

In this web site we attempt to fully chronicle the cars of the Single-Seat Can-Am. Please contact Allen if you can help.