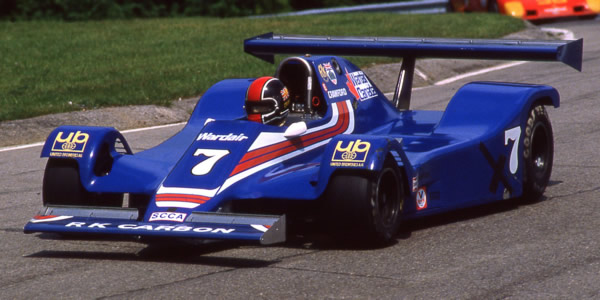 This was the season Can-Am fell from grace, crushed by the expansion and success of CART. Firstly, the race promoters decamped, most damagingly the high-profile Laguna Seca and Riverside "Fall Series" meetings, a mainstay not just of the Single-Seat Can-Am but before that through F5000 and the first Can-Am back to USRRC in the early 1960s. Both moved to CART. Mid-Ohio, another regular date going back to USRRC days, cancelled their Can-Am round too and the SCCA's inability to deliver ten races led to the loss of title sponsor Budweiser. The top teams were also on their way, with Galles Racing, VDS and Paul Newman all moving across to CART, the latter joining forces with Carl Haas. Jim Trueman of TrueSports had left a year earlier, taking Bobby Rahal and VDS chief crew Steve Horne with him, and they had proved immediately successful. Most drivers went in the same direction; the exception being Al Holbert who moved to IMSA.

With a shortened calendar and the most professional teams gone, Can-Am only had the cars left. After all, there was nowhere else a single-seat sports car could race. The Frissbees were acquired by Canadian Tire and raced by Jacques Villeneuve Sr while the VDS cars went to Norwood-Walker Racing who ran them for Michael Roe. Joining them was the converted F1 Ensign N180B entered by Fernley Racing for Jim Crawford and these three kept up the excitement levels, the title eventually going to the Canadian after he was able to hold off Crawford over the closing laps of the final race.

Some additional excitement was created by the appearance of a Group C Porsche 956 in a Can-Am race, John Fitzpatrick winning at Road America. Further back, veteran Horst Kroll mopped up a series of minor placings in a ten-year-old Lola T330 that had received the latest Frissbee tweaks.

The SCCA, represented in Can-Am by Pro Racing Manager Ron Zimmerman, allowed a number of new engine options in 1983 in an attempt to bring in new cars. The ex-F1 cars, which had been a success in 1982 despite a lack of power, were allowed to use 3.3-litre Cosworth DFL engines, but only to a weight minium of 650 kg, compared with 600 kg for 3-litre DFVs. In the 2-litre class, Mazda rotary engines were to be allowed; the 12A would run to a 520 kg minimum, and the 13B to 549 kg. The uncertainty this must have caused may be one reason why no new Can-Am designs appeared in 1983, except for the entirely bonkers Herb Adams Escort.