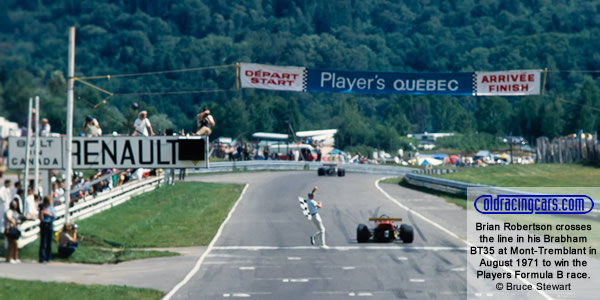 The Canadian Road Racing Championship was first organised by CASC as a series for sports car racing in the early 1960s but it achieved little coverage or recognition until the end of the decade when Gulf Canada stepped in to sponsor a revised championship. CASC were persuaded by Peter Broeker to move to single-seater racing for 1969 and to adopt the SCCA's 1600cc Formula B class, but after pressure from the Ontario region, the new 5-litre Formula A cars were also included.

A number of Canada's top drivers entered the series, Bill Brack, George Eaton and Eppie Wietzes proving the most competitive but they were ably supported by Horst Kroll, Al Pease and Nat Adams. Wietzes won the first title in his Lola T142 and swapped to a McLaren M10B for 1970, winning more comfortably that season. Brack acquired a new Lola T142 and Ludwig Heimrath a McLaren but there was insufficient depth on the Formula A class and most of the exciting racing was in the cheaper and flourishing Formula B class. In Formula A, the prize money available wasn't enough to cover expenses. For 1971, CASC dropped Formula A and continued just with the 1600cc cars.

Unfortunately, Canada lacked a reliable motor racing publication of record during this period - Canadian Track & Traffic often displaying an almost peverse unwillingness to comment or report on the national championship - so records are patchy.

Results for this series have proved very difficult to complete, due in part to the poor coverage in Canadian magazines such as Track & Traffic. Wolfgang Klopfer has provided Autoweek reports, Don Markle uncovered much material in the CMHF Archives, Jim Ibey found what he could from Track & Traffic and Tom Johnston has provided scans of entry lists and reports from a variety of sources.