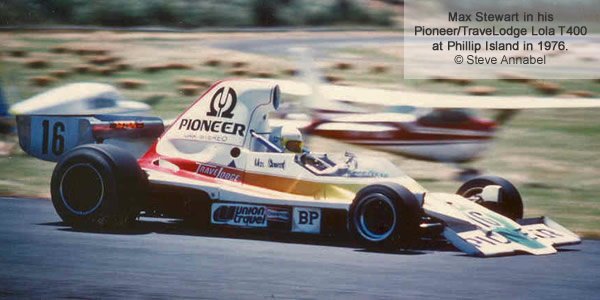 After 12 seasons of the Tasman Cup, New Zealand and Australia went their separate ways in 1976 and ran separate championships, but still for F5000 and still in their traditional dates. Once the pre-series hype had died down, the Peter Stuyvesant series only attracted one non-Australasian name, the US F5000 champion Brian Redman, but after RAM Racing pulled out their planned entries, Redman found himself driving a F2 Chevron B29 entered by Fred Opert.

A large Australian contingent was promised but only five arrived, led by Max Stewart and Kevin Bartlett in Lola T400s and Bruce Allison in an older T330/T332. The locals were consistently quickest, Graeme Lawrence (T332) and Ken Smith (T330) dominating practice and leading all four races. Redman was spectacular and led at Pukekohe but his horsepower disadvantage was too great.

Before the International series, the POSB Gold Star had been run over seven races with Ken Smith generally winning and Lawrence generally finishing second.

Immediately after the International series, MANZ announced that they were dropping F5000 and adopting Formula Atlantic, but calling it Formula Pacific. With hardly any suitable cars in the country, Smith and Lawrence were allowed to run their F5000s in the Gold Star but on a handicap system. So although Smith won every heat of every race with Lawrence always second, the championship was awarded to Dave McMillan whose Formula Pacific Ralt RT1 almost always finished third. It was not a pretty way for F5000 to finish.

The 1976 results were kindly provided by the late David McKinney, New Zealand's leading motor racing historian. He compiled then from a wide range of sources, including his own magazine articles and books.