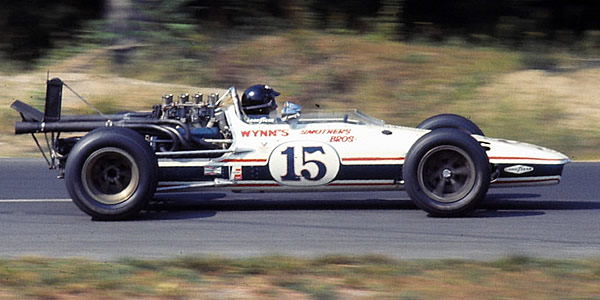 The first season of 5-litre Formula A was won by Lou Sell in the Smothers Bros' Eagle Mk 5. The Eagle was based on AAR's monocoque 1968 Indianapolis design, and was the dominant car that first season, with Sell and George Wintersteen proving almost unbeatable. Lola had taken a very different approach with their spaceframe Lola T140, based on components left over from a project to build a GT version of the Lola T70, and this proved to be the most effective customer car. Top amateur driver Jerry Hansen took a deserved victory at Road America in his T140.

Other cars that performed well in 1968 were four US-built spaceframe designs, the McKee Mk 8, LeGrand Mk 7A, Vulcan and Spectre HR1. Also seen were Autodynamics Corp's monocoque Caldwell D8, a couple of monocoque Eiserts, the WRE, and Lyle Forsgren's Forsgrini. Some cars were converted from other categories, such as Chuck Trowbridge's ex-F1 Lotus 24 with Shelby Ford engine, and a pair of McLaren M1B Can-Am cars converted to single-seater form.

A total of 29 5-litre cars took part during this first season, plus seven assorted 3-litre cars, and these cars took up 41% of the grids during the season, a very healthy average of 15 cars per race. Formula B cars, the most popular being the Brabham BT21C and Lotus 59B, took up 49% of the grid, and the remaining 10% were 1100cc Formula C cars, led by the Brabham BT21B of Fred Opert with its potent 1.1-litre Cosworth SCC engine.

The points table is derived from Wolfgang Klopfer's excellent Formula A and Formula 5000 in America p10.

The 1968 US Formula A results were collated by Chris Townsend using reports from Competition Press & Autoweek. Further information has been added from entry lists, qualifying sheets and results sheets. Wolfgang Klopfer has been a tremendous source of information on this series.

Just one program for 1968 is still needed: the Grand Prix of Oklahoma at War Bonnet on 16 Jun 1968, but an entry list is also needed for Donnybrooke Grand Prix at Brainerd on 22 Sep 1968 as the program did not include one.