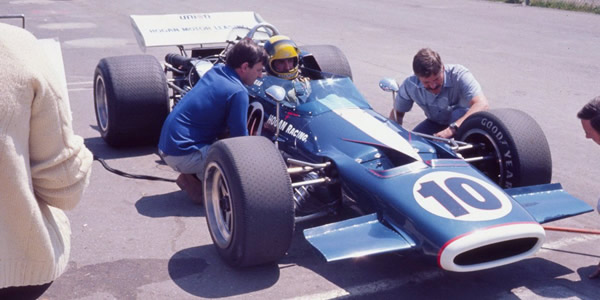 David Hobbs had been one of the quickest drivers in US Formula 5000 in 1969 and 1970, but had only done two half-seasons for Surtees. In 1971, he was poached by Roger Penske to drive Penske's Goodyear-shod sports car and Indy car teams, and that necessitated a move from Surtees' Firestone team for F5000. Penske convinced Carl Hogan to employ Hobbs in place of 1970 champion John Cannon, and Hobbs would drive the same McLaren M10B that had taken Cannon to the 1970 title. Trojan had a new car, the McLaren M18, but this turned out to be no improvement on the M10B. Surtees brought out the Surtees TS8, and Sam Posey led their US efforts. As usual, Lola had outsold everyone and seven Lola T192s were on hand at the opening race of the season.

Hobbs was on pole for the opening race but his clutch failed on the pace lap, and Australian visitor Frank Matich took a surprise victory in his McLaren M10B with Repco Holden mill. Hobbs dominated the next two races, taking pole and leading every lap, but Posey then won at Mid-Ohio after a great scrap with the Englishman. Posey was the quicker in qualifying at the next two races as well, but Hobbs won the races to tie up the title with two events still to go. Brett Lunger then gave Lola their first win of the season at Donnybrooke after Hobbs' engine failed, and the final race of the season ended with a fitting Hobbs-Posey 1-2 finish.

With the ban on tobacco advertising on American TV coming into force at the start of 1971, there was a scramble by the major tobacco companies to use major sporting events as a way to promote cigarette use. RJ Reynolds attached their Winston brand to NASCAR's main championship, Marlboro sponsored the USAC championship, and L&M picked up the SCCA's Formula 5000. As safety became a major concern in motor racing through the 1970s, the irony of the major championships' role in promoting one of the main killers of men in America was lost on many commentators.

For 1971, USAC divided its main championship into three divisions, the most important of the three being held only on paved ovals, and the road races being placed into a separate division. Although USAC championship races had been held at Sears Point, Continental Divide and Indianapolis Raceway Park in 1970, there was little interest in a series held only on road courses, and the only race to take place was at Seattle. A schedule was announced for 1972 including races at Continental Divide, Brainerd, Bridgehampton, Mosport Park and Road Atlanta, but in November 1971 USAC admitted sponsorship could not be found and the series was dropped.

The 1971 US Formula A results were collated by Chris Townsend using reports from Competition Press & Autoweek. Further information has been added from entry lists, qualifying sheets and results sheets. Wolfgang Klopfer has been a tremendous source of information on this series.