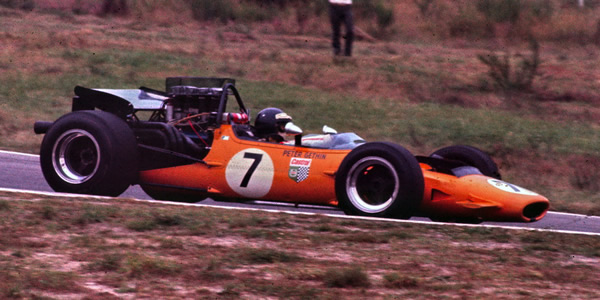 Plenty of cars, lots of variety and some good racing rewarded John Webb's decision to import Formula A into Britain as Formula 5000. McLaren (through Trojan) and Lola had built production F5000 cars and they were quickly joined by the TS5, a collaboration between designer Len Terry, US TV star and team owner James Garner, and John Surtees, whose name the car would eventually carry. The McLaren and TS5 followed F1 design principles, in contrast to the cheaper and higher-selling Lola which was a spaceframe chassis using components from Lola's T70 sports car project.

The works McLaren M10A was prepared by Church Farm Racing, with team manager Mike Earle, for Peter Gethin to drive in the UK and he won the first four races to storm into such a championship lead that he took his car to the US to mop up some prize money over there as well. The Surtees team also changed their focus to the US series leaving Trevor Taylor to run a works assisted car in the UK. Taylor matched Gethin's four wins and the McLaren driver returned to protect a slim championship lead going into the last round. Taylor led Gethin in the race until the pair tripped over errant backmarker Chris Warwick-Drake, and were both eliminated. Mike Hailwood, driving the works-supported Lola T142, took the race and Gethin the title.

The other round of the series was won by David Hobbs (works Surtees TS5) at Mondello Park 13 Jul 1969.

The BRSCC announced in August that fuel injected would be banned in F5000 from 1 December 1969. The only cars to have used it to that point were the Church Farm McLaren M10A of Gethin and one of the TS5s.

The British Formula 5000 results were compiled by Chris Townsend in 2002 using the main British magazines Autosport and Motoring News. Some subsequent information has been added using the Anglo-German yearbook Race Report 3.

All programs for 1969 have now been located but qualifying times are still missing for Zandvoort 10 Aug 1969.