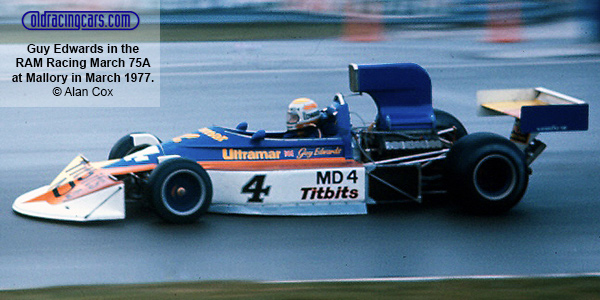 The first season of Group 8 racing had shown that a well-prepared and reasonably up-to-date F1 car was the ideal option, and Tony Trimmer proved that when he secured a brand new Surtees TS19 for 1977, prepared by Melchester Racing, and breezed to the title. Guy Edwards bought the March 75A V6 that Hexagon had run in 1976 and took it back to RAM Racing. It was good, but not quite good enough, with its Ford V6 engine, so RAM converted it to a F1 Cosworth DFV engine, after which Edwards won two of the last three races.

Also proving effective in F1 cars were Emilio de Villota, who replaced his Lyncar 006 with a pair of F1 McLarens, Divina Galica, who also acquired a Surtees TS19 and came close to winning at Donington as well as leading at Brands, and Derek Bell who won one race in the Penske PC3, but was disqualified at Mallory Park and penalised 48 points. The most competitive of the 5000cc cars was Bruce Allison's Chevron B37, which finished second three times, and Val Musetti also went well in his V6-engined March 752. Best of the F2 cars was Tony Rouff, who won at Thruxton in Graham Eden's Ralt RT1/77.

The 1977 Shellsport Group 8 results were originally compiled by Jeremy Jackson using Autosport and the Formula One Register books.

All programs for 1977 have now been acquired, but please get in touch if you can help with the hunt for F5000 programs or are able to provide any original results sheets.