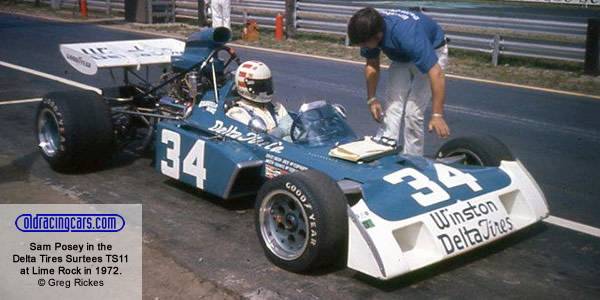 As McLaren's 1971 offering had been something of a flop, Carl Hogan bought new Lola T300s for reigning champion David Hobbs and his new No 2 driver Brett Lunger. Hobbs' arch rival Sam Posey stayed with Surtees and had the latest F1-based Surtees TS11. These two started the opening race on the front row, but some interesting new competition was close behind them. George Follmer had a Matich A50 third on the grid, the Australian car having been put on pole position by Frank Matich at all five recent Australian Internationals. A little further back on the Laguna Seca grid was Graham McRae, who had designed the Leda LT27 in collaboration with Len Terry, and had then won four Tasman series races as well as three early-season races in Britain before transferring the car to the US series. The Kiwi passed Posey and then Hobbs to win the first heat, and then won the second after Hobbs retired. Hobbs bounced back with a win at Edmonton, but McRae won the next two to take a big points lead.

Two more new F5000 cars had reached the series by this time: Brian Redman in Sid Taylor's Chevron B24 and John Cannon in his Oldsmobile-powered March 72A, and the rest of the season was remarkably competitive. Eppie Weitzes won at Donnybrooke in his Lola T300, then Lunger won the next two from Redman, as Hobbs' run of retirements continued. Lunger was the only person who could overtake McRae's points total at the final race at Riverside, but he crashed out on the opening lap. Hobbs was again on pole, again took fastest lap, and again retired, leaving Redman to take a deserved victory in the Chevron, and McRae, who finished third, took the title.

The points table is taken from the SCCA's issued table, which said a 20-15-12-10-8-6-4-3-2-1 points system was used for the first 10 places, and that the best six finishes from the eight events counted. McRae's total was the only one affected by this limit. See also Wolfgang Klopfer's excellent Formula A and Formula 5000 in America p50.

The 1972 US Formula A results were collated by Chris Townsend using reports from Competition Press & Autoweek. Further information has been added from entry lists, qualifying sheets and results sheets. Wolfgang Klopfer has been a tremendous source of information on this series.