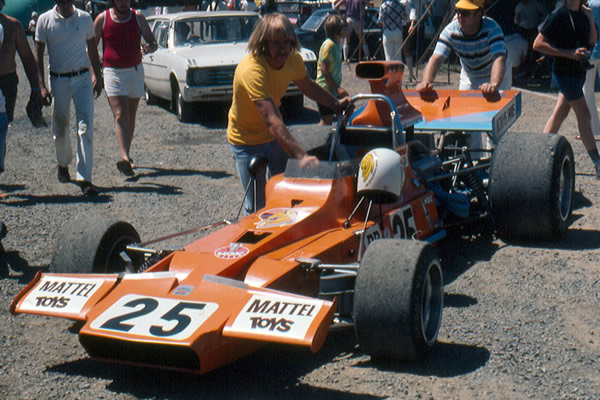 Johnny Walker's Matich A50 is pushed out for practice at the 1973 Tasman race at Sandown Park. Copyright Glenn Moulds 2005. Used with permission.

Described by Frank Matich as an open-wheel version of his highly successful SR4 sports car, the Matich A50 dominated Australian F5000 from its debut in November 1971 at the Australian GP, through the Australian rounds of the 1972 Tasman Cup and the 1972 Australian Gold Star series.

Frank Matich had been the first Australian convert to Formula 5000, buying a McLaren M10A in late 1969, and he replaced this with an M10B during 1970, which he fitted with a Repco-Holden engine instead of the usual Chevrolet.  After several accidents in the M10B, his team fabricated two replacement monocoques for the car, and developed it into what Matich termed the M10C.  The team had also designed and built a series of sports racing cars, the most successful of which had been the SR4 during 1969, so had the expertise necessary to create Matich's own Formula 5000 car in 1971.  The Matich A50 was an immediate success, taking pole position at the Australian Grand Prix at Warwick Farm in November 1971, and winning the race handsomely.  The New Zealand rounds of the 1972 Tasman were next, where the Matich was not quite a match for Graham McRae's new Leda LT27, but still performed very well.  On home turf for the Australian leg of the Tasman series, Matich turned the tables on McRae and took pole position at all four races, although he was only able to win once, at the GP meeting at Sandown Park.  He underlined his domestic superitority by winning four of the six races in the 1972 Australian Gold Star.  After winning one more race during the 1973 Tasman, Frank Matich built a revised car, the A51, for the 1973 US season.

In addition to Matich's A50, the team built customer cars for George Follmer in the US and for Johnnie Walker in Australia.  Although four A50 chassis numbers were used, Matich's "002" was not a new car but was 001 with new paint and some suspension changes made in the four days between the last New Zealand race, at Teretonga, and the first Australian race at Surfers Paradise. Both identities were used on the car thereafter and it is called "001/002" here. A long-running dispute between the car's current owner Bryan Sala and CAMS was resolved in 2013 when the car was issued with a CAMS COD.

Chassis 003 was later wrecked in the US but the the two surviving cars, "001/002" and 004, raced on for many seasons in Australia. This research was originally conducted by Aaron Lewis and then extensively reworked in May and June 2003 with the assistance of Bryan Miller in Australia, and Milan Fistonic in New Zealand. Tony Nicholson has filled in the gaps on the US-based A50. Thanks also to Wolfgang Klopfer for spotting omissions and to Kevin Thomson, Glenn Moulds and Autosports Marketing Associates/Bill Oursler for the photographs.

All and any further help would be gratefully received. Please email Allen at allen@oldracingcars.com if you can add anything. 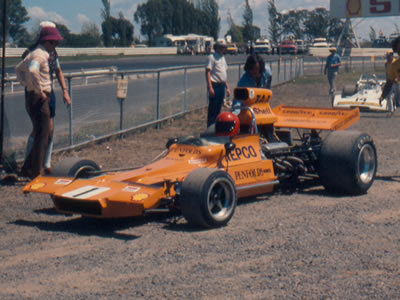 Frank Matich's Matich A50 on its way out to practice at the Sandown Park Tasman race in February 1973. Copyright Glenn Moulds 2005. Used with permission. 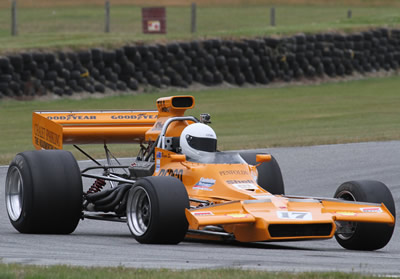 Bryan Sala in his Matich A50/A51 at Teretonga in February 2013. Copyright Kevin Thomson 2013. Used with permission.

Completed November 1971. Frank Matich (Aus): first raced at Australian GP 21 Nov 1971 (won); and in the four New Zealand rounds of the 1972 Tasman. After the New Zealand races, it was widely reported that Matich had replaced chassis 001 with a new, lighter A50 with modified suspension. However, several of the team's mechanics have a different story - that the original car was renumbered 002 and repainted as a sop to sponsor STP. It is now widely accepted that 001 and 002 were the same car.

"002" was raced by Frank Matich at Surfers Paradise Feb 1972 and at the other Australian races of the 1972 Tasman series (won at Warwick Farm). He then used it in the Gold Star series 1972 and won the championship, winning races at Sandown Park, Oran Park, Surfers Paradise and Warwick Farm plus two races at Calder. Retained for the Tasman series 1973. Advertised by Frank Matich Racing in Racing Car News November 1973.

According to Bryan Sala, the car was then sold to K & A Engineering (Dale Koennecke and Harry Aust) who used the engine and transmission for a sports sedan. The complete but disassembled car was sold around 1984 or 1985 to Gavin Sala who later passed it to his son Bryan. Peter Turk reskinned the tub in 2003/04 and the car was restored and raced in historic events by Bryan Sala in the 2011/12 Tasman Revival series. Raced by Bryan Sala at Sydney Motorsport Park 1 Sep 2013, the first round of the 2013/14 Formula 5000 Australia Cup Series. Last seen at Sandown in November 2014. Won the Tasman Revival race at Barbagallo Raceway in October 2016. Also raced at Hampton Downs in January 2017. 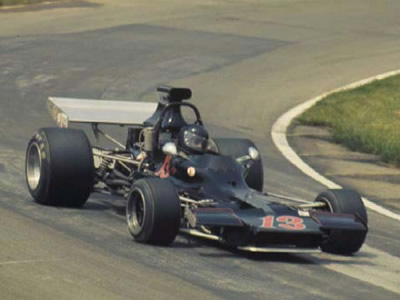 John Gimbel in Matich A50-003 during the 1973 season. Copyright Autosports Marketing Associates and Bill Oursler 2001. Used with permission.

Sold to Merle Brennan for 1974: Laguna Seca in October 1974 (7th in Heat 1 and 12th in the final) and Riverside (12th in Heat 2). This car was wrecked on Brennan's way home from Riverside when the trailer carrying the Matich popped off the tow ball and the trailer skated off the road and hard into an embankment. The car was tied down by all four corners and the trailer crashed hard enough to twist the trailer and, therefore, the tub on the Matich. With F5000 declining, Brennan built a sports car (to the SCCA's ASR class) using a new spaceframe two-seater chassis plus parts of the Matich and a LeGrand body. After using this in late 1975 and through 1976, he sold it to Chris Bender who modified the rear bodywork, named it the "McBender" and raced it in Can-Am in 1977. Bender recalls it being sold to a Nevada owner, then to an Idaho owner and it was last seen when advertised in 1983 or 1984. In 2001, the sports car was reported to be on the East Coast of the US. By 2017, it was being entered by Jim Freeman (New York, NY) in US historic events as a Matich SR3 Can-Am car. 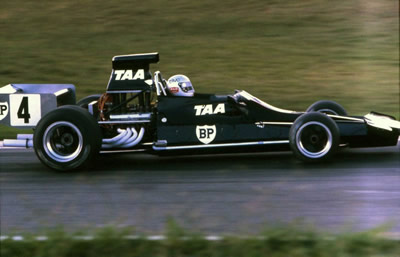 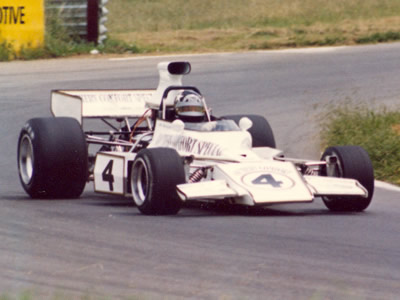 Jon Davison in the Matich in side-radiator form at the Oran Park round of the 1976 Rothmans series. Copyright Glenn Moulds 2005. Used with permission.

Initially built as a spare car for Matich but overtaken by the A51 project. The rolling chassis was spotted at the factory by Johnny Walker who did a deal to buy it and fit the engine and transmission from his Elfin MR5. The car was built up at Matich's workshop.

Bought from Bendell by Aaron Lewis (Australia) 2004. Raced by Lewis in the January 2006 Tasman revival series and at Eastern Creek late November 2008. Driven by Aaron's brother Philip Lewis in the Formula 5000 Tasman Cup Revival at the Australian GP meeting 28 Mar 2009. Raced by Aaron Lewis at Sydney Motorsport Park 1 Sep 2013, the first round of the 2013/14 Formula 5000 Australia Cup Series. Sold to Philip Lewis (Australia) late 2013. Raced by Lewis at Phillip Island in March 2016, at Road America in July 2016 and July 2017, at COTA in November 2017, and at the WeatherTech International Challenge at Road America in July 2018.

The chassis numbers used here are derived from a variety of documentation.