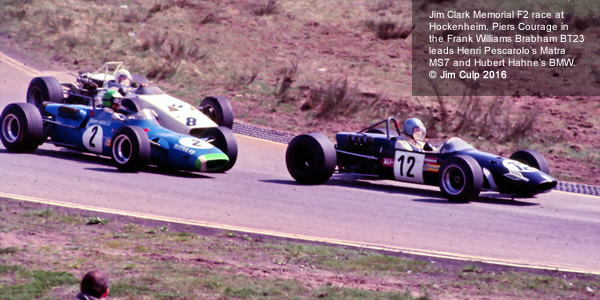 The Matra MS7 maintained its stranglehold on Formula 2 with Johnny Servoz-Gavin taking the title in the Ken Tyrrell's second Matra International entry. Graded drivers took 70% of the podium places in 1969 with Servoz-Gavin's teammate Jackie Stewart winning two races and the title and Jochen Rindt also bagging a brace in his works Lotus 59B. The only other ungraded drivers to achieve regular success were Hubert Hahne in BMW's Lola T102 and François Cévert in one of the works Tecnos. So five different constructors had success in F2 in 1969, Matra, Brabham, Lotus, Tecno and Lola.

A hypothetical team championship would have been won by Ken Tyrrell's Matra International with the Lotuses of Roy Winkelmann Racing and the works Matras of Matra Sports tied for second, Frank Williams Racing Cars in fourth, Bayerische Motoren Werke fifth and Tecno Racing Team sixth.

The BMW and Ferrari teams were the only ones not run Cosworth FVA engines.

All but the final championship race were won by graded drivers, by Rindt (twice), Jean-Pierre Beltoise (works Matra MS7), Stewart (twice) and Piers Courage in Frank Williams' Brabham BT30. Maximum points in those races were awarded to Pescarolo, Hahne (twice), Servoz-Gavin (twice) and Cévert. They are not included in the win totals above.

The 1969 Formula 2 race results - drivers, positions, laps completed and grid positions - were collated by Rob Ryder using a range of sources including the F1 Register Black Books. Chassis identities were then added by Allen Brown using Autosport and Motoring News as his primary sources as noted in detail at the foot of each results page.