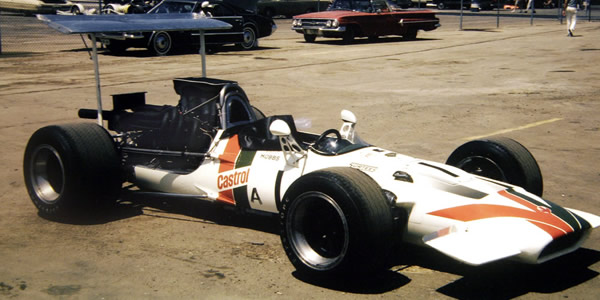 Eagle did not build a new F5000 car for 1970, so the leading cars were expected to be the Trojan-built McLaren M10B and the Surtees TS5A, both updated versions of the cars that had dominated the second half of 1969. Despite a bragging war between the two companies Trojan outsold Surtees in the US by only four cars to three. Lotus had also sold four of their new Lotus 70, and Lola's US agent Carl Haas had sold eight of the new monocoque Lola T190 in time for the start of the season.

John Cannon, driving the Hogan-Starr McLaren M10B, dominated the first race, but he missed Edmonton in order to try to qualify for the Indy 500, leaving Ron Grable to win in his Lola T190. Cannon won at Seattle but a good choice of tyres gave Grable the win at Laguna Seca. Grable led from pole at Sears Point as well, but when he engine failed, Gus Hutchison took over to register the first of two straight wins in his F1 Brabham BT26. Cannon won at Road America to reestablish his championship lead, only for George Follmer to force the Lotus 70 into the picture by dominating Mont Tremblant in his Boss Ford-engined car. It was David Hobbs' turn to excel next, the Surtees TS5A driver winning at Donnybrook and Lime Rock, although Cannon's regular podium placings were giving him a commanding championship lead. The season was capped with a brand new car, the Penske-entered Lola T192 of Mark Donohue, winning at Mosport and at Sebring, sandwiching Follmer's second win in the Lotus-Ford. Cannon took the title by some distance, but McLaren, Surtees, Lola, Lotus and Brabham had all won races in a remarkably competitive season.

The points table is derived from Wolfgang Klopfer's excellent Formula A and Formula 5000 in America p35.

The total prize money for the championship increased by 50% to $370,000, the main reason for the increase being $5,000 per event from L&M, plus a $40,000 end-of-season points fund provided by the cigarette company. L&M also invested $70,000 into local promotion of the 14 races to build up spectator numbers, and would take over title sponsorship of the series for 1971. Cannon earned $47,000, compared with Adamowicz' $27,000 in 1969. However, the tobacco advertising cash being diverted from the now banned medium of TV did not work out well for everyone. At the insistence of L&M's Jack Southard, the FB cars were jettisoned as a support series for 1971. Rival tobacco company Players, who did not get involved in the US market, sponsored a new Formula B series in Canada, but the SCCA's L&M deal prevented the US FB series being allowed to find a tobacco sponsor of their own. Winston's approach was turned down, and SCCA Pro FB was dead within two years.

The 1970 US Formula A results were collated by Chris Townsend using reports from Competition Press & Autoweek. Further information has been added from entry lists, qualifying sheets and results sheets. Wolfgang Klopfer has been a tremendous source of information on this series.