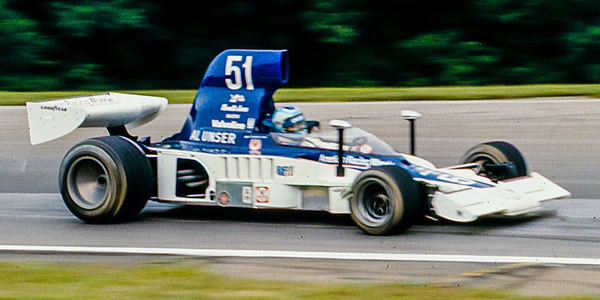 After two years of trying and failing to defeat Brian Redman, Mario Andretti moved to F1, and left teammate Al Unser to lead Vel's Parnelli Racing's F5000 campaign. Surtees F1 driver Alan Jones also joined the series, and won his first two races in Theodore Racing's Lola T332 and then in Doug Shierson's new March 76A. Such was the Lola T332's numerical dominance of F5000 that even Dan Gurney's AAR operation gave up on its Eagle 755 and bought a second-hand T332. As the British series had moved to Formule Libre, the VDS team joined Theodore Racing in moving to the US series where they ran Lola T430s and a Chevron B37 for Teddy Pilette and Peter Gethin but failed to win a round. The only other non-T332 race winner was Jackie Oliver in the Shadow-Dodge DN6B.

With two rounds to go, Jones and Oliver were tied for the championship lead, but when Oliver retired at Road America and Jones had to miss the race to be at the Dutch GP, Redman won and leapt into a significant points lead. Third place in the last round secured the Lancastrian his third successive title, while Unser's win propelled him into second place in the final points table.

The excitement around F5000 in 1975, after the cancellation of the ailing Can-Am series, proved short-lived, and promotors were moving towards IMSA's better promoted and better packaged GT series. SCCA's response was to bring back Can-Am, but sacrificed F5000 in the process. In 1977, the old F5000 cars would be allowed to run as sports cars alongside what was expected to be an exciting new breed of 5-litre Can-Am cars. That story continues with the 1977 Can-Am series.

The 1976 US Formula 5000 results were collated by Chris Townsend using reports from Formula and Competition Press & Autoweek. Further information has been added from entry lists, qualifying sheets and results sheets. Wolfgang Klopfer has been a tremendous source of information on this series.