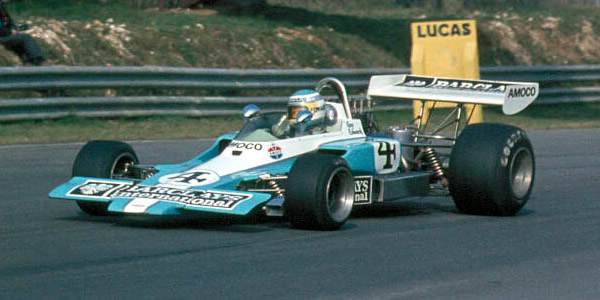 Despite winning the title with Gijs van Lennep in 1972, Surtees dropped out of F5000, and McLaren also ended its production arangement with Trojan. Trojan produced a new McLaren-derived Trojan T101 model for 1973, which proved very competitive on both sides of the Atlantic. McRae, Chevron and March filled the gap with the McRae GM1, Chevron B24 and March 73A being put into full production, while Lola developed the 1972 T300 into the new Lola T330.

After two seasons of F1, Peter Gethin was dropped by the BRM team and quickly returned to F5000 with a works Chevron B24. His plan was to race in the lucrative US L&M series, but had time to win the opening round of the Rothmans European series, and also to beat all the F1 cars in the Race of Champions a day later, including three BRMs! Also on their way to the US were Graham McRae, who won the second European round from pole position in his McRae GM1, Jody Scheckter in Sid Taylor's Trojan, and the two Haggar Slacks Lola T330s run by Carl Hogan for David Hobbs and Brett Lunger, who finished 1-2 at the third round. A much thinner field was left behind: Steve Thompson had a second-hand Chevron B24 and won at Brands Hatch in April, Keith Holland won two races in the Ian Ward Racing Trojan T101, Belgian Teddy Pilette also won a brace in the Racing Team VDS Chevron B24, and so did Guy Edwards, who ended the season very strongly in his Lola T330.

After a poor time in the US, Gethin reappeared to drive a works development B24, and won easily at Oulton Park, but Pilette racked up second and third place finishes, and took the title narrowly from the very consistent Tony Dean, whose 11 top-five finishes were favoured by the new 20-15-12 points system.

Despite its billing as the Rothmans European championship, the series' overseas trips did not add much value. The first trip was to the new Autodromo di Santamonica at Misano, only to be told after practice that the circuit had a 2-litre limit. The trip to Zandvoort was postponed from July to September, so the first race outside England was across the Irish Sea to Mondello Park in July. The tiny Danish track at Jyllands-Ringen hosted the series in September, a week before the Zandvoort race finally took place in pouring rain.

The British Formula 5000 results were compiled by Chris Townsend in 2002 using the main British magazines Autosport and Motoring News. We now have programs and qualifying times for most races in 1973 but still need the entry list for Misano on 10 Jun 1973 and full qualifying times for Jyllands-Ringen on 23 Sep 1973.

Please get in touch if you can help with the hunt for other F5000 programs or are able to provide any original results sheets.