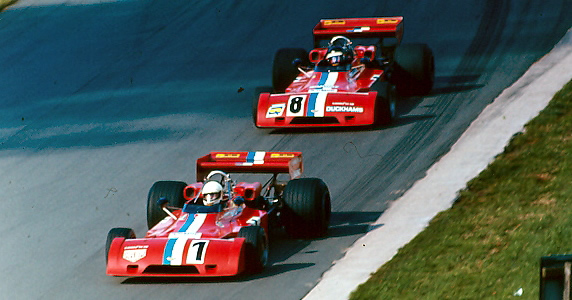 Chevron built two updated F5000 Chevron B28s for VDS in 1974, and Peter Gethin won four races that season in his car. Despite that success, no other sales were made.

Teddy Piltte, Peter Gethin and Steve Thompson had all won races in Chevron B24s during 1973; Pilette had won the British F5000 Championship; and Gethin then won the 1974 Tasman Championship, so Chevron prospects for sales in 1974 seemed strong.  However, the Lola T330 and its new T332 derivative was the car everyone wanted, and Chevron's only sales of the revised B28 design were to Count van der Straaten's VDS team. With Pilette and Gethin retained as drivers, the VDS team were the dominant force in the first half of the season, Gethin winning four of the first ten races, and Pilette taking three pole positions but was robbed of victory more than once.  But as Bob Evans got the McKechnie Racing Lola T332 sorted, he took control, and the B28 seemed to have reached the limit of its development.  Gethin remained in contention, but a series of retirements in the autumn allowed Evans to seal the title.

Although only two complete B28s were built, Chevron records indicate five monocoques were built, so identification of the remaining is cars is not as straightforward as it might appear.  The differences between the B24 and B28 were minor, and both of the 1973 VDS B24s were converted to B28 specification during the Tasman series in January and February 1974. This later caused some confusion as Tony Dean referred to his ex-VDS B24 as a B28 at the same time that he also owned a 'real' ex-VDS B28. It is possible that this particular B24 has got muddled up with the two genuine ex-VDS B28s or that the ex-works B24/B28 development car is now in the mix.

Of the two B28s currently being races in historics, one has now been identified with confidence but the other still has a stubborn gap in its history around 1980. As there is a B24/B28 also still missing, which like the B28 is "ex-Gethin" and "ex-VDS", it is not yet possible to make the same positive identification of it. The other problem is that the chassis plates on the cars are not what would be expected from the histories: Keith Norris's car was been wearing the chassis plate "B28-74-02" since 1983 or earlier, and Johnty Williamson believed his car to be "B28-74-01" as long ago as 1979. So there may be a mistake in the identification of these cars even as early as 1974.

All would be gratefully received. Please email Allen at allen@oldracingcars.com if you can add anything. 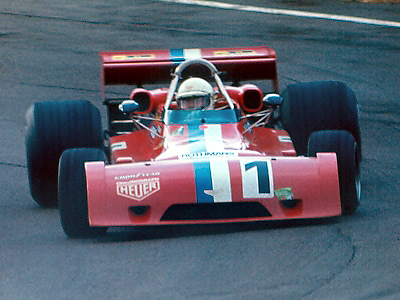 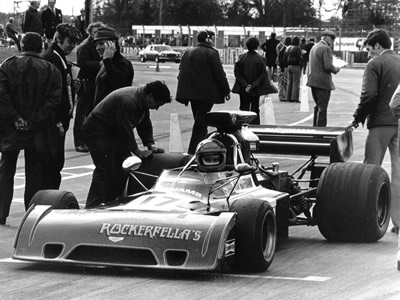 Next seen with Victor Cartmill (Formby, Merseyside) at the Castle Howard hillclimb on 3 April 1977 ("[Tony] Dean's last F5000 mount"), then presumably the car raced by David Flanagan at the Lancs AC Woodvale sprint on Easter Sunday 10 April 1977. Driven again by Cartmill at Woodvale in early June. Advertised from Liverpool from January to May 1978. Sold to Ian Stronach (Manchester): 1979 libre racing (photographed in Autosport at Aintree in October where it shows a striking resemblence to the Hoffman picture shown here even including apparantly mismatched mirrors); and then advertised from Manchester as ex-Pilette/Dean B28 in October 1979. Sold to Robin Darlington (Overton-on-Dee) 1979, then to Vic Norman 1980. Vic's recollection is that he sold the car to John Harper but Harper does not remember owning it.

Subsequent history unknown but believed to be the Norris car. 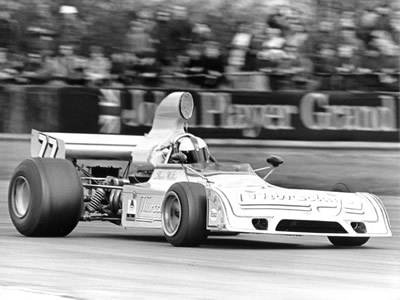 Dave Walker in the B28 again at the International Trophy in 1975. Copyright Ted Walker 2005. Used with permission. 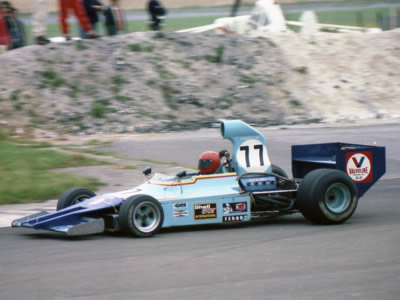 Dennis Leech in the ex-Thursdays/RAM Chevron B28 at Thruxton, probably in 1977. Copyright Andrew Scriven 2013. Used with permission.

Romeril fitted the car with Jaguar V12 engine and used it for hill climbs and sprints from October 1983 up to 1994 when he fitted a 5.7-litre Chevy engine. Finding this somewhat powerless, he acquired the 6-litre Chev engine from the ex-Mick Hill VW Beetle Supersaloon then being broken by Mathew Mortlock. After just one further hillclimb, Romeril agreed to exchange the car for the 6-litre Chev-powered March 86B of Paul Gardner (Preston, UK). Romeril has always regretted the deal, not least because a flawed rear upright casting caused him to crash in March heavily on his first outing in it.

There were two B28s originally and there are two B28s today so it may be seen as over-cautious to refer to mysteries. However, the mid-1973 development B24 is also missing and it is possible that one of the B28s below could be an updated B24. It is also worth noting that there would have been a spare B28 monocoque floating around after about August 74 when Gethin's B28-74-02 was subject to a precautionary rebuild. This tub would be tired but not too bent, and presumably useable.

By the late 1970s, one of the B28s had settled in the north of England, around Manchester, and the other was last seen in the southwest, with Dennis Leech in Devon.  A mystery car appeared in London in 1978, and although that seems likely to have been the ex-Leech car, that conclusion may be rash.  The former works development B24, which had been updated the B28 specification in 1974, was also in London in 1975 when John MacDonald had owned it.  MacDonald was involved with Super Saloon racing, and the advertisements for this mystery London B28 also included a Chevrolet Corvair Super Saloon.  Connections such as this can just be coincidences: it is probably just a coincidence that the history of 'the Keith Norris car' can be traced back to Plymouth in Devon, not far from where Dennis Leech's car had lived.  The current owners of the B28s may be understandably frustrated by this reluctance to reach a positive conclusion, but more information is still needed.

Advertised from 01-883 5338 (Autosport 17 Aug 1978 p68) then later from same number evenings/weekends (with Chevy Corvair Super Saloon) "in excellent condition" (Autosport 9 Nov 1978 p67, also 16 Nov 1978 p52). Another advert appeared from this number in 1979 offering a reward for the return of an ex-Mick Hill, Tony Rosen Super Saloon Capri and gave addresses in Welwyn, Herts and Stanhope Street, London NW1 (Autosport 8 Mar 1979 p53). Marcus Pye believes this would have been Tony Strawson. No other information known. 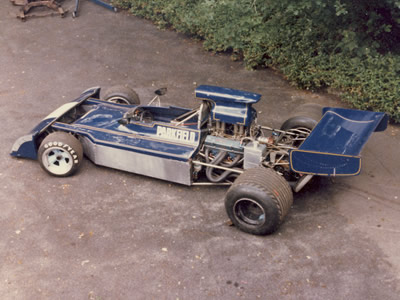 Keith Norris's Chevron B28 when it first arrived. Note the similarities with the picture of Ingo Hoffman in Tony Dean's Chevron B28. Copyright Simon Hadfield 2018. Used with permission. 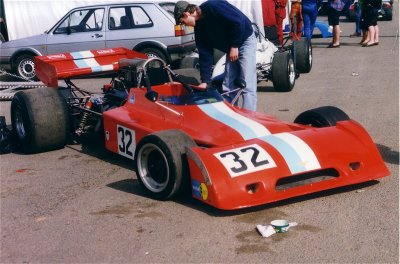 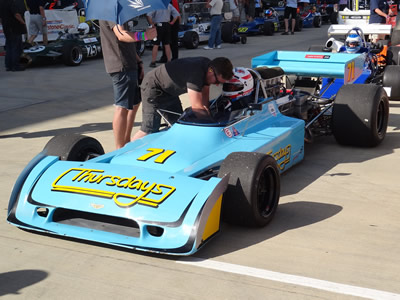 Simon Taylor in his Chevron B28 at Silverstone in July 2013. Copyright Keith Lewcock 2013. Used with permission.

Built by Simon Taylor using many original parts from his brother Daryl Taylor's B28. It was finished in Thursdays livery, as used on RAM Racing's B28 in 1975. The Taylors have been entirely open about the origins of this car. 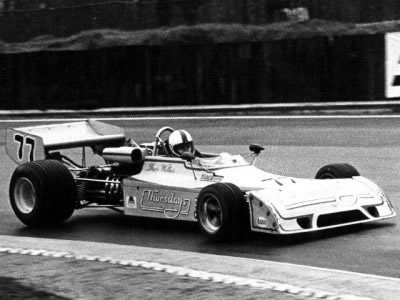 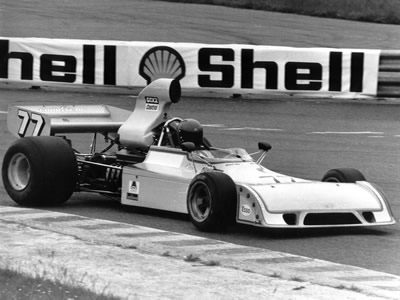 Dennis Leech in his newly-acquired ex-RAM Chevron at Thruxton in May 1976. Copyright Ted Walker 2005. Used with permission.