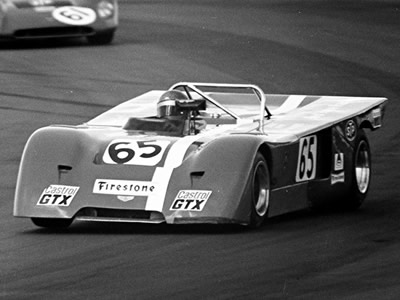 Chevrons were built by Derek Bennett Engineering Limited, a company formed in 1966 on the back of Bennett's success building and racing Clubmans Formula cars. Chevrons were hugely successful in GT racing between 1966 and 1968, and Chevron moved into Group 5 Sports in 1969 and then to Sports Prototypes in 1970.

A Formula 3 car was built in 1967 but Chevron did not find sustained success in single-seaters until the B25 Formula 2 car in 1973. The company was at a peak in 1978 with the B42 F2 car and B43 F3 car when Bennett was killed in a hang-gliding accident. Chevron floundered without him and the Tony Southgate designs for 1979 flopped. After a bid to move into Can-Am in 1980 failed, the company went into liquidation in February 1980, and most of its remaining assets were sold to a consortium led by Robin Smith in Newmains, Scotland, who built cars as Chevron Racing Cars (Scotland) Limited. Smith built B52 and B54 Sports 2000s, and B53 and B56 Formula Atlantic cars but after three difficult years the company ceased trading at the end of September 1983. Its assets were sold to Roger Andreason and Tim Colman's Andreason Racing & Tuning Ltd, who then built cars as Chevron Cars Ltd. A majority shareholding of this company was owned for a time by Chris Smith and then, since 2012, by David Witt. Chevron Heritage Ltd was set up by Roger and Tim in 2012 to cater for older cars. Meanwhile, Chevron Racing Team Ltd was run by Vin and Helen Malkie from 1979, who also owned the registered Chevron name and Trademark. This business was acquired in 2016 by WDK Motorsport, but that business closed in 2018.

This page provides a summary of the company's production and link to the pages which either summarise the research to date or are the home of active research projects. More sports racing and single-seater Chevrons are being actively researched. Please email Allen at allen@oldracingcars.com if you can add anything.

According to Race-cars.com and the Chevron Heritage, the numbers B75 and B76 were used for Kart projects.