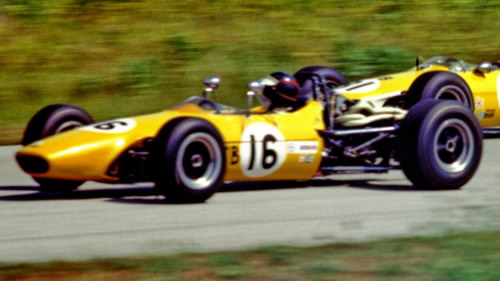 The Chevron B14 was based on the new Formula 3 B9 design but fitted with a Ford twin cam for SCCA Formula B. Chevron have previously claimed that only three were built but there is strong evidence in favour of a fourth.

Chevron's single-seater programme for 1968 was already quite ambitious, with a Formula 2 car that had flopped as well as a string of reasonably successful F3 cars, but Fred Opert had taken on Chevron's North American agency and was confident that he could sell several cars for Formula B. Three were built by August but were numbered amongst the F2 and F3 cars, making it difficult to ascertain the exact numbers built. A fourth car was built before the end of the season and some of Chevron's surviving records suggest that another two were built.

Only two of the B14s are known for certain at present: Chris Ball's ex-Broeker car in England and Jeffrey Giannini's ex-Smothers car in the US. Peter Mohr (Queensland, Australia) has a car in early 2014 that he reports to be the ex-Grimaldi car. He is currently researching its history.

Bought new by Tom Tufts (Milwaukee, WI) and raced in Formula B in 1968, starting at Road America on 27 July 1968, at the Buckeye Sprints at Mid-Ohio two weeks later and then at Donnybrooke (Brainerd) on 22 September 1968. Identified from an invoice as chassis FB-68-8. Sold to Tom Gelb (Mequon, WI) for 1969, replacing an ancient Brabham BT2, and raced in Pro and CenDiv FB until crashed at Mosport Park in August 1969. The car was repaired and sold in 1970 but its subsequent history is unknown. However, it may well be the car raced by fellow Central Division racer Jim Trueman (Amlin, OH) late in 1970. 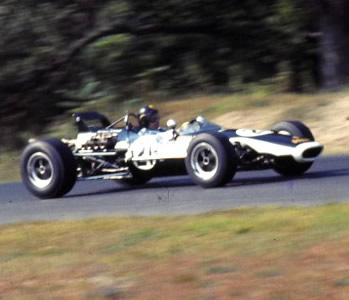 Peter Broeker in the Stebro-Chevron at Lime Rock in September 1968. Copyright Jeff Savage 2004. Used with permission.

Canadian veteran Peter W. Broeker (Pt. Claire, Quebec) bought a Chevron B14 for 1968 and surviving Chevron records imply that it was chassis number FB-68-10. Used in SCCA pro events and also in Canadian Eastern Zone Formula Championship and Championnat de Formule du Québec races in 1968. Retained for 1969 and raced in the Canadian Road Racing Championship and the Molson Championship, often entered as a Stebro-Chevron. Then apparently retained by Broeker until 1974, when he used it in a few races. After Broeker's death in late 1980 the B14 was bought from his estate by Gerry Jones. Jones sold it to Roger Fountain who moved to England in 1988, and sold the car to Chris Ball who had it restored for HSCC racing in the UK. Raced by Nicholas Ball in the 2014 HSCC Classic Racing Car series. 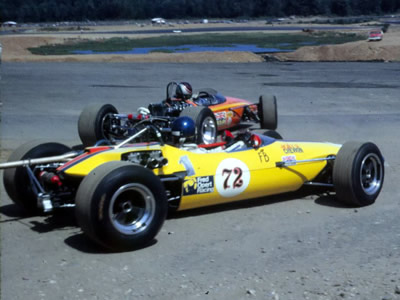 Joe Grimaldi follows Bill Gubelmann out onto the track in his Chevron B14 at Bryar Motorsport Park, probably at the National in Sept 1968. Copyright Mark Wrightson 2015. Used with permission.

Joe Grimaldi acquired one of four late 1968 Chevrons to arrive in the US. At least three of these were described by Chevron as B14s, including Grimaldi's. He debuted the car at Mosport Park in Aug 1968 and raced it twice more in Pro events. Grimaldi reappeared in August 1969 with what was reported to be a Chevron B15B which he raced three more times. Larry Wright then acquired a Chevron from Grimaldi for the 1970 season which was described to him as a B15 but when Wright advertised the car in 1971, he called it a "late-1968 Chevron FB" which identifies it as a B14. Wright traded the Chevron to Charlie Hayes in May 1971 for a new Brabham BT29. 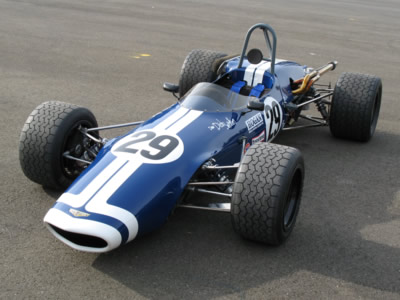 Bought late in 1968 by Dick Smothers of Smothers Bros Racing (Fullerton, CA) and first raced in the Donnybrooke Grand Prix at Brainerd 22 September 1968 . Chevron records appear to identify this car as chassis FB-68-14. Smothers had a blue #29 Chevron FB for 1969 and this is very probably the same car, even though it was sometimes referred to as a B15B. Loaned to Joe Alves (Sherman Oaks, CA) for 1970 but not raced after blowing the engine in practice at Sears Point in June 1970. Alves eventually sold the car some time between 1975 and 1978 but it is then unknown until owned by a D Hullinger around 1992 who started a restoration. It passed to Gabe Lakatosh (Los Angeles, CA) in 1998 who completed the restoration and raced it infrequently. Then sold to Jeff Giannini (Puyallup, WA) in 2003 who has raced it continuously since then. It had a full restoration in 2008 and is maintained by J&L Fabrication (also in Puyallup, WA).

Two more B14s appear later, Oliver Grant's car in 1969 and Jim Trueman's in 1970. Trueman's is easiest as it could easily be the ex-Tufts car but Grant's poses a problem. One possibility is that Joe Grimaldi sold his B14 to Grant for 1969 and that Grimaldi then raced a new B15B in 1969. Then Grant could have traded the B14 back to Grimaldi for Grimaldi's newer B15B for 1970. That still allows the ex-Grimaldi B14 to go to Larry Wright for 1970 but means there is one more B15B than thought.

Oliver E. Grant (Norfolk, VA) raced a yellow #21 Chevron in SCCA FB events in 1969, describing it as a B14 at Mont-Tremblant in September. He retained the car for a few races in 1970 when it wore #18 but was described as a B15B. It is possible that Grant had acquired Joe Grimaldi's B14 and traded it back to Grimaldi for a newer B15B for 1970. Grant died in 2007 and the subsequent history of the Chevron remains unknown.

In Sep 1970, a young Jim Trueman (Amlin, OH) raced a blue and silver Chevron in the Mid-Ohio 'Pro' Formula B race. Trueman would later found the Red Roof Inn motel chain and use his ensuing wealth to form the Truesports racing team and win the Indy 500 in 1986. After the 1970 season, he sold the Chevron to one-time F1 driver Tom Jones (Euclid, OH) who understood it to be a B14 and entered it as such. He raced it in 1971 and 1972 and then traded it to Ed Zink for the remains of the McLaren M22 that Zink's nephew Harry Ingle had crashed at Road America. The later history of the Chevron is unknown.

Thanks to Tim Colman and the late Roger Andreason of Chevron Heritage for kindly sharing their notes on this model, and to owners Chris Ball, Jeff Giannini and Peter Mohr for their help with this article. Thanks also to Mike Summers, who worked very hard to identify his ex-Garey Cooper Chevron for many years, and interviewed Larry Wright amongst others during that project.