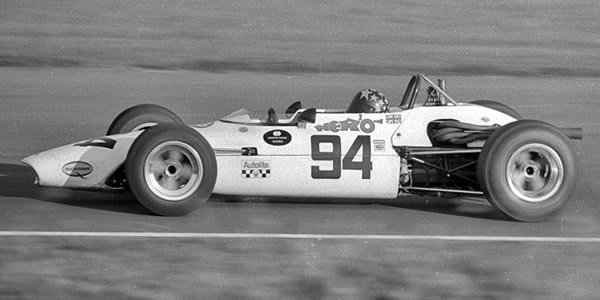 Barrie Maskell in the NERO Chevron B17 at Thruxton in September 1970. Copyright Chris Bennett 2014. Used with permission.

The 1970 Formula 3 Chevron B17 was a development of the B15 with a stiffened centre section, new uprights and a tidied engine cover. Jürg Dubler and Peter Hanson both won major F3 races in this model using Novamotor engines.

After Reine Wisell’s successes in the B15, the B17 sold well with well-established F3 star Jürg Dubler forsaking Tecno for a B17, the talented Kiwi Bert Hawthorne moving from Brabham, and B15 customers Peter Hanson and Barrie Maskell staying on board. Dubler got the seaon off to a good start with a win at Montjuich Park in April, and Hawthorne beat a strong British national field at Brands Hatch in May. Later in the season, Hanson won an International at Karlskoga and Dubler won the high-profile Zandvoort race at the end of August. Both Maskell and newcomer Chris Skeaping took their B17s to victory in significant British races.

With the introduction of the 1600cc F3 for 1971, larger stronger cars were needed but the B17s continued in use in hillclimbs for some years. 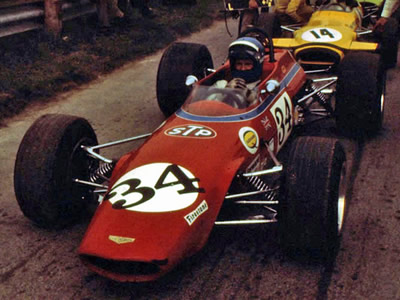 Peter Hanson awaits the start of the Formula 3 race at Brands Hatch in July 1970 in his Chevron B17-Novamotor. Copyright Ted Walker (Ferret Fotographics) 2014. Used with permission.

New to Peter Hanson (Yorkshire) and run for him in European F3 in 1970 by the Paul Watson Racing Organisation (PWRO). The car was red and used Novamotor engines. Won at Hameenlinna in June and at Karlskoga in August. Taken to the Brazilian Temporada in January 1971 but used as a hire car. Sold to Keith St John for 1971 and converted to the new 1600cc formula, but rarely appeared that season. Advertised for sale in September 1971. Subsequent history unknown.

New to Norman Foulds (Fleetwood, Lancashire) and raced in British and European F3 in early 1970. Not seen after June 1970. The car was later sold by local racing car dealer Bobby Howlings to Geoff Lambert (Burnley, Lancashire), a libre racer. However, the Chevron was not raced by Lambert, and a Brabham BT38C was bought for the 1973 season instead. The Chevron was then sold to former Chevron factory engineer Kevin Hodgkinson, who ran it in the 1100cc hillclimb class from 1974 to 1977 at least. Kevin recalls selling the car to Graham Brown in Perth, Scotland, who used it in hillclimbs. Brown recalls selling it to someone in a village in Worcestershire, probably John Shenton (Astwood Bank, Worcestershire), who ran a Chevron B17 with Ford twin cam engine in hillclimbs from early 1979 to early 1980. In 1981, it was sold by Bob Fernley of AMCO Racing (Bobby Howling's latest concern), to Vincenzo Zahra (Malta) who used it in the local hillclimb championship. Zahra sold it to Martin Spiteri in 1981 who sold the car to Sacha Darmanin in 1995. In 2009, it was bought from Darmanin by multiple Malta hillclimb champion Hubert Camilleri. It has been in storage with Camilleri since 2009.

New to Barrie Maskell (Leeds, West Yorkshire) and raced in British and selected European F3 in 1970 as part of the Northern England Racing Organisation, using Holbay engines. Won at Oulton Park in September against a strong national field. Used again in the Temporada in early 1971, after which Maskell got a drive in a works-supported B18. Maskell's B17 was advertised by Doug Linton at the Chevron factory in September 1971, saying that it had been rebuilt on a new chassis. Subsequent history unknown.

New to New Zealander Bert Hawthorne and raced in British F3 using Holbay engines. Hawthorne wrecked the car in late May, and after trying a couple of other cars, settled on the new Tui F3 car. The Chevron was repaired at the factory and sold via Fred Opert to Ron Cohn (Modena, NY) to be used in SCCA Formula C in 1971. It was later sold to Bill Anspach (Palm Beach Gardens, FL) and is presumably the car he raced in 1973, 1974 and 1975, winning the FC class at the 1974 Run-Offs. To Sandy Brandt (Ft Lauderdale, FL/Pompona Beach, FL) for SEDiv FC in 1976 and 1977. To Ric Capone (Riviera Beach, FL) for FC in 1978, qualifying for the Runoffs, and advertised by him in October 1978. Subsequent history unknown. In 2017, a car with this claimed history was acquired from Ed Lamantia at Huffaker Engineering in the US by a customer of Damon Milnes in the UK.

New to Jürg Dubler (Oberhasli, Switzerland) and raced in European F3 in 1970 using Novamotor engines, and winning at Montjuich Park, Brno and Zandvoort. Bought from Dubler by Austrian sportscar driver Klaus Reisch in 1971 for the new 1600cc F3, using a Wainer-built Alfa Romeo engine, and run by Auto Ascher. Then likely to be the Chevron B17-Alfa raced by Maximillian Plass (Munich, Germany) in F3 in 1972. Subsequent history unknown.

New to Rolf Riesen (Liebefeld, Switzerland) and used in Swiss National events, plus some French hillclimbs a short distance from the Swiss border. Not seen after 1970 but maybe the car raced by fellow Swiss Bendicht Kipfer in the 1-litre class of Swiss and French hillclimbs in 1971 and 1972. Subsequent history unknown but reported by Kevin Hodgkinson to be the car owned by Jurg Tobler. Jürg Tobler (Basel, Switzerland) had a B17 from 2003 or earlier. He raced a pale green Chevron B17 in European Historic F3 1 Litre Trophy events in 2006. Raced by Tobler ADAC, HSCC and Historic Racecar Association (HRA) events in Germany over the next five years. Advertised by Tobler in January 2014. 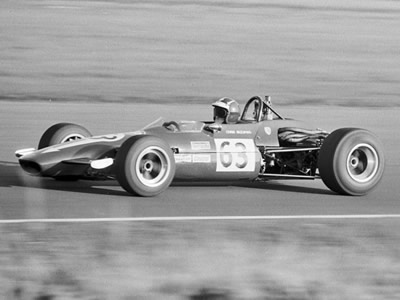 New to Chris Skeaping and used in British F3 in 1970, using Lucas engines. Skeaping retained the car for 1971, fitting Rowland Ford twin cam engines. Not seen in 1972, but "Chris Skeaping's Chevron B17" advertised from a London number in September 1972. In early 1973 it was being raced in Northern Irish events by Eddie Irvine (Newtonards, County Down, Northern Ireland) in a class for 1000cc racing car events. Subsequent history unknown but reported by Kevin Hodgkinson to be "now owned by Tony Mantle & driven by Nigel Bancroft in UK Peter Hanson Trophy events". Nigel Bancroft raced Mantle's orange Chevron B17 in historic F3 events from 2009 to 2013. Mantle's 'ex-Skeaping' car was then raced by James King in 1-litre F3 races in 2015. 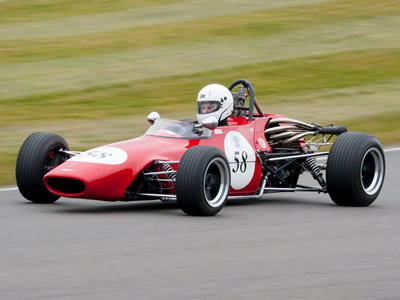 Jim Blockley in his Chevron B17 at the Goodwood Members Meeting in March 2016. Copyright Brian Edgeler 2016. Used with permission.

New to Ken Sedgley and raced in British F3 and libre racing in 1970, using Holbay engines. Retained for 1971 and converted to the new 1600cc F3, again with Holbay engines, but rarely seen. Sold to John Finch (Chesterfield) in July 1971 and used in F3 for the rest of the season. Updated to B17c specification and retained by Finch for 1972, now sharing with Graham Lynch, but did not actually race very often. Converted to Formula Atlantic specification for 1973 but used with more success in Formule Libre. Reappeared in 1974 when raced by Alan Thomson in Scottish and northern English sprints and hillclimbs, winning the Scottish hillclimb championship in 1976. To Russell Paterson for 1977 but wrecked. Later via dealer Bobby Howlings (Alderley Edge, Cheshire) to "M Wakefield-Brand" in 1978, then to David Pullen (Guildford, Surrey) in 1991. Raced by Pullen in HSCC Classic Racing Car Championship events in 2004. Driven by Alexander Sims for an Autosport test in February 2011. The "ex-Pullen" B17 acquired via John Pearson by Jim Blockley (Stroud, Gloucestershire) in 2015. Raced by Blockley in HSCC racing until sold by him to Jonathan Sharp (Alderley Edge, Cheshire) in September 2021 to use in the HSCC Historic F3 series plus selected events in Europe.

New to Carlo Scarambone (Italy) and raced in Italian F3 in 1971, initially with a Novamotor Ford twin cam and later using an Alfa Romeo engine. Retained for 1972 but Scarambone was rarely able to qualify for race finals that season. Subsequent history unknown.

The new 1600cc Formula 3 was introduced for 1971 and five of the nine B17s were converted: Keith St John bought 70-01, Chris Skeaping retained 70-07, Ken Sedgley retained 70-08, Auto Ascher acquired Jurg Dubler’s and fitted an Alfa Romeo engine, and Carlo Scarambone’s late-season 70-09 also appeared in F3 in 1971 using an Alfa Romeo engine. Two other cars are known in 1971: Norman Foulds’ 70-02 was sold to Geoff Lambert but did not race again for some time, and Bert Hawthorne’s 70-04 was sold to the US for SCCA Formula C. This leaves two to find: Rolf Riesen’s Swiss-based 70-06 which disappeared after the 1970 season, and Barrie Maskell’s NERO 70-03 which vanished after being advertised by the Chevron factory in September 1971.

Two unidentified B17s appeared during 1971: Bendicht Kipfer raced a B17 in the 1-litre class of Swiss and French hillclimbs; and Philippe Chenu ran a B17 in French hillclimbs, again in the 1-litre class, from late September onwards. Both Kipfer and Chenu ran their cars again in 1972. Geography would suggest that Kipfer had the ex-Riesen 70-06, implying Chenu bought the ex-Maskell car.

Bendicht Kipfer (Switzerland) drove an Equipe Bernoise Chevron B17 in 1-litre events in 1971, starting at Sembach in April, a German national event where almost all the "Formula 3" entries were old 1000cc cars. He also raced the car in the 600-1300cc class in Swiss national events and in a few French hillclimbs, all of which were close to the Swiss border. He retained the car for 1972, again running in both Swiss and French events. Nothing more known, but likely to be the car of Rudolf Brönnimann (Thun, Bern, Switzerland) in 1974 and 1975.

Philippe Chenu (France) raced a Chevron B17 in French hillclimbs between 1971 and 1973. It was described at first as a F2 Chevron with a 1000cc F3 engine but as the class system changed, Chenu acquired a 1300cc fuel-injected Broadspeed engine to compete in the up to 1300cc Group 8/9 class. Chenu advertised the car in November 1973 as a "F3", noting that it had a 1000cc Novamotor engine, presumably its original F3 unit, as well as the Broadspeed engine. Subsequent history unknown but quite likely to be the car later raced in French hillclimbs by P Bertrand.

Previous version of this page showed the 1974-75 Formula C "B17" of Guy Revesz (Des Plaines, IL), but as only one B17 is known to have gone to the US and that was with Bill Anspach in 1974, Revesz's car fits better on the Chevron B17b page.

"P Bertrand" raced a Chevron B17 in French hillclimbs in 1975 and 1976. Its origins are not known but it is quite likely to be the car raced by Philippe Chenu in French hillclimbs up to the end of 1973. Bertrand ran it in the 1300cc class but its engine was not mentioned until late in 1976 when it was said to be 1255cc, implying it was one of the Renault R1135 engines originally developed for Formule France. Nothing more known. 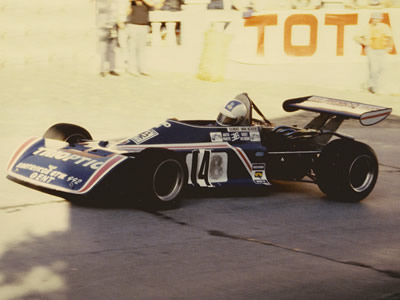 Paul Mawson (Newcastle, Staffordshire) had raced a Jomo hillclimb car until an accident in 1975. He reappeared in 1976 with a Chevron "B17/35", indicating a Chevron B17 that had been upgraded in some way to partly Chevron B35 specification. Mawson raced the car in the 1600cc hillclimb class until 1979 at least, reportedly changing his name to Paul Williams some time around 1977. After the 1979 season, Williams sold the car to Guido Van Acker in Belgium, who raced the car in the Belgian hill climb championship in 1980. Guido then sold the car to France and had no further contact with it.

In addition to the above, an unknown Chevron B17 was driven by Stefano Zanetta.

We are indebted to Mike Faloon, Archivist for the 1000cc F3 Historic Racing Association, for information on the current whereabouts of many of these cars. The 1000cc F3 race results referenced here are based in large part on the ground-breaking work of the Formula One Register, and many of the chassis numbers were originally identified by FOR partner Duncan Rabagliati. Our immense gratitude for the work of the FOR cannot be expressed too often. Thanks also to Steve Wilkinson, Chris Townsend, Richard Page, Brian Speake, Alan Brown, Ted Walker, Bryan Miller, Michael Oliver and John Lambert.