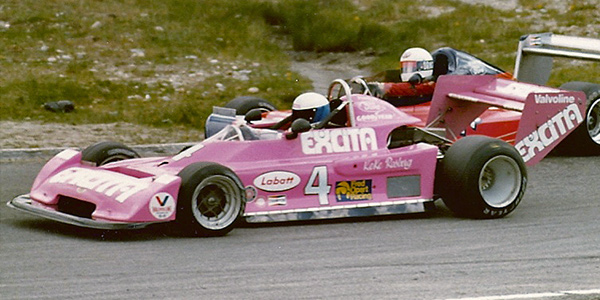 The Chevron B45 was a relatively minor update to the Chevron B39, and US agent Fred Opert sold very few compared with the rival March 78B. Keke Rosberg won three races in his B45 but, with F1 and F2 campaigns to distract him, narrowly missed out on the Labatts Championship.

Keke Rosberg had been one of the quickest runners in North American Formula Atlantic in 1977 with Fred Opert's Chevron B39, and had then dominated the New Zealand Formula Pacific series in January 1978, so expectations were high. Opert bought two B45s for Rosberg to drive in the North American series, but the only other sales were to regular Chevron customer Tony Martin in South Africa and to Rick Shea, who ran his as a hire car in North America.

Chevron's hopes were pinned on Rosberg, who would be earning his 'air miles' in 1978 by racing Opert's Chevron B42 in Formula 2 as well as the B45 in Formula Atlantic, but Opert was also trying to secure the talented Finn an F1 drive. After a plan to drive for Willi Kauhsen fell through, Rosberg joined Teddy Yip's Theodore team and an extraordinary win in the pouring rain at the International Trophy secured the F1 drive for the season. His time was now split three ways, driving the B42 in the F2 race at Thruxton just five days before he drove both the B45 and the F1 Theodore over the Long Beach weekend. He started strongly in the B45 with wins at Westwood and Québec City, but the F1 Theodore was uncompetitive and Opert moved him temporarily to the ATS F1 team. After an excellent win in the F2 B42 at Donington Park in June, he then tried to do two events in one weekend, dashing from the French GP overnight to the Lime Rock Atlantic race, only to wreck his regular B45 in practice. Yip then bought a pair of Wolf F1 cars for Rosberg to drive in the German and Austrian GP, either side of another Formula Atlantic win at Hamilton which put him back on top of the Formula Atlantic points table with one race to go. After failing to pre-qualify for the Italian GP, Rosberg had time to test the Chevron B45 before the final Formula Atlantic race at Montréal and preferred to drive the 1977 B39. Opert was away, managing his three-car F2 team at Hockenheim, and without him, a poor choice was made. Rosberg qualified the B39 well down the field, and a spark plug problem dropped him out of contention, ending his chances of the title.

New to Tony Martin and used in the South African Formula Atlantic series in 1978, initially wearing Chevron B39 bodywork. Retained for 1979, but Martin also had an older Chevron B34 which was used at several races. The B45 was then fitted with a 3-litre Ford V6 engine for the new Formula South Africa that started in July 1979. The car was retained for 1980, but destroyed in a garage fire. 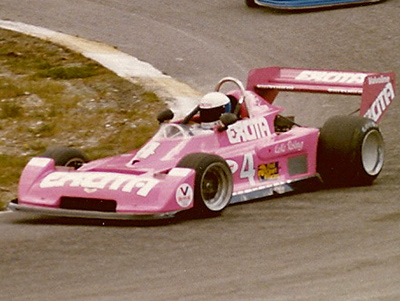 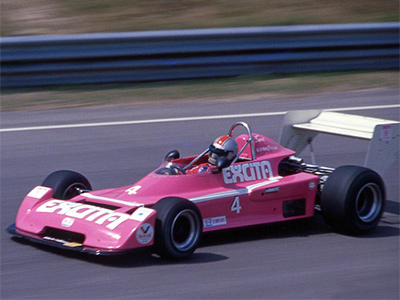 New to Fred Opert Racing for Keke Rosberg to for race in North American Formula Atlantic in 1978, with backing from Excita. Raced by Bob Earl at Montréal in September when Rosberg drove an older B39. Retained by Opert for 1979, and driven by Marco Tolama. To Paul Fostini (SCCA New York Region) and used in NEDiv Formula Atlantic in 1981, scoring seven points that season. It was then sold to AJ "Buddy" Pugliese (New Rochelle, NY) in 1982, and used in Race Car Club of America (RCCA) races, the club formed by Pugliese in 1979 to promote the Club Ford format. In 1983, Pugliese started a new RCCA class called Formula American, for pre-ground-effect Formula Atlantic cars with their Cosworth engines limited to 9200 rpm but also allowing the use of the Chevrolet 60° V6 engine limited to 6500 rpm. The B45 was fitted with the V6 engine and Pugliese raced it through much of the 1980s. In the early 1990s, he loaned the car to Walter Nelson who crashed it and then took it to a fabricator at Dutchess County Airport for repairs, where it sat for some time after the fabricator's business closed. In February 2014, Pugliese sold the whole project to Ric Baribeault, who first had to locate the missing tub and then took it all to Bob Cavanaugh for restoration. The restoration progressed slowly and was stil incomplete in 2020 when Baribeault sold it to Cordell Secrest (Houston, TX). Secrest moved the project to the Danbury, CT, workshop of Mike Agnifilo (North Salem, NY), and it remained with him until he eventually acquired it partly in payment of storage fees. Agnifilo plans to rebuild the car to original specification. Still with Agnifilo in October 2022. 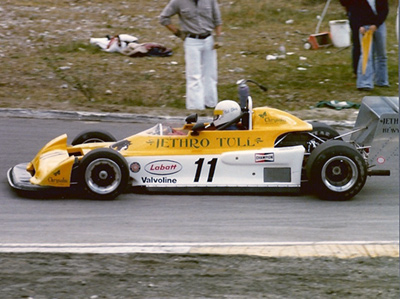 Rick Shea in his Jethro Tull Chevron B45 at Westwood in April 1978. Copyright Brent Martin 2011. Used with permission. 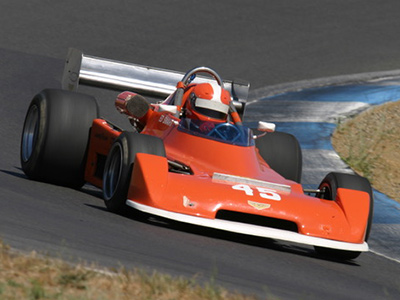 Ed Swart in his Chevron B45 at Thunderhill Turn 5. Copyright Edouard Swart 2021. Used with permission.

New to Rick Shea Racing and in North American Formula Atlantic in 1978, with backing from Jethro Tull. Raced by Shea at the first round, and by Marcel Talbot, Skeeter McKitterick, Bob Earl and Tom Gloy at later races, Retained by Shea for 1979 and raced by Mark McCaig (Calgary, Alberta) in the Pro series. To Colin Tuckey (Calgary, Alberta) for 1980, and entered in the Pro series by FBM Racing. Retained by Tuckey for 1981. Later raced by David Farmer (Niagra Falls, Ontario) in 1983. The car ended up with another Chevron in a museum in Canada, until 1989, when they were spotted by Peter Hemming. The B45 was acquired by Ed Swart in February 1993, and prepared for historic racing. He raced the B45 from October 1993 with a BDA engine in the Formula Atlantic class, and after about five years ran it with a 2-litre BDG engine in F2 classes. Still owned by Swart in February 2021. 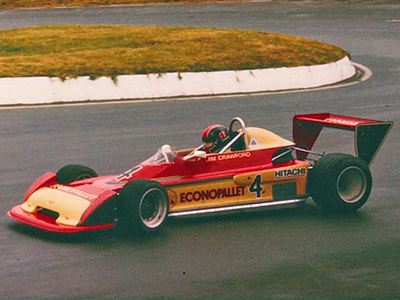 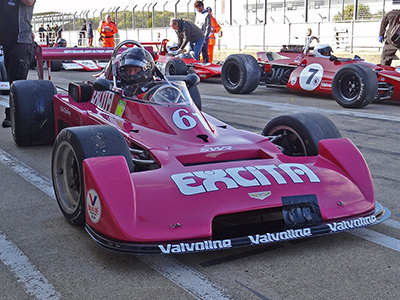 New to Fred Opert Racing for North American Formula Atlantic as a second car. Used as a spare by Keke Rosberg and as his race car at Lime Rock. Also raced by Eje Elgh and by Arturo Merzario at Trois-Rivières. Raced by Rosberg at Macau in November 1978. Advertised by Opert from ATS Engineering, where he had moved to become team manager, in March 1979 as a lightweight B45 with 1979 rear suspension and F2 fuel tanks. Then sold to Mike Peers and entered in the revived British series for Jim Crawford in 1979, winning five races and finishing second in the championship. Fitted with a BDX engine for 1980 and run by Plygrange Racing for Crawford in the F2 class of the Aurora series. Stayed with Plygrange for 1981 when raced by Vin Malkie (Northwich, Cheshire) in libre racing. Reappeared in 1983 when raced by Duncan Gray in the British Formula Atlantic series. It was entered by Peers himself in libre in 1984. Then to Steve Raine for Sprints, co-driven by Robin Boucher, and then hired to Bob Fearnley's RK Racing for Tiff Needell to drive in a pair of races in India in early 1985. Then reportedly to Stuart Ridge for 1986. To John Lloyd then to Simon Hadfield (Shepshed, Leicestershire) but damaged in an accident at Mallory Park. Restored with original Excita condoms bodywork and sold in 1998 to Jeff Wright, a Scotsman then living in Canada. Still with Wright (Wilmington, NC) in 2014 and raced regularly in vintage racing. By 2019, the car had moved to Scotland and was owned by George Coghill (Halkirk, Highland) and was prepared by Steve Worrad for sprints. Raced by Coghill in sprints and hillclimbs in 2021 and 2022.

Three of the four Chevron B45s remained in the same hands for 1979, the only B45 to be sold being Rosberg's spare that Opert took to the Macau Grand Prix for Rosberg to drive, and then sold back to England where Jim Crawford won five races of the revised British Formula Atlantic championship. Rick Shea kept his B45 for another customer and Tony Martin also retained his instead of risking a new "ground effect" B49. After many years of running ever more cars in junior formulae, Opert was moving into F1 team management for 1979, joining the ATS team, but was still left with the B45 and one of the older B39s. He was approached by Mexican Marco Tolama, who had backing from Terramar, a charter plane company, and Opert put together a small operation with mechanic Mike Giddens and the two Chevrons. The intention was to buy a March 79B later in the season.

Opert's move to F1 turned out to be a disaster, as even the famously charming Opert could not manage the team's short-tempered owner, Günter Schmid, and Opert resigned after Schmid pointlessly withdrew the cars from the French Grand Prix in a fit of pique. Opert then returned to Formula Atlantic and bought the promised March 79B for Tolana, the car arriving in time for Road America in July. After Tolama found it undrivable, he moved back to the B45, only for that to fail before the race so he ended up racing the untried B39. Opert put Derek Daly and then Eje Elgh in the 79B later in the season, but achieved no further success. After a brief attempt to restart his team in 1980, Opert left motor racing to focus on his auto sales business.

Thanks to Chris Townsend for his work on this subject, and to Ed Swart, Simon Hadfield, Steve Wilkinson, Paul Fostini and Dan Rear. Peter Hill's book "The Fred Opert Story" is a very entertaining read, and gives useful background on this period.