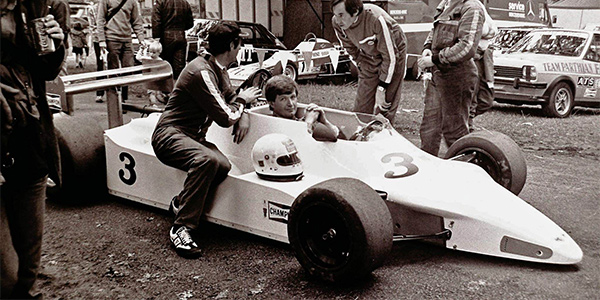 Gary Gibson in the Chevron B56 at Phoenix Park in 1982 as his crew Terry Wilkinson (on sidepod) and Davey Connolly exchange views. Copyright Ian Lynas 2022. Used with permission.

Designed and built by Robin Smith, the Chevron B56 was a new Formula Atlantic car for the 1982 season using an entirely new honeycomb chassis. Masanori Sekiya and Gary Gibson drove the car with limited success.

After Robin Smith and his partners had acquired Chevron in 1980, the first few products were continuations or developments of existing Chevron designs for Sports 2000 and for Formula Atlantic in 1981. The B53 was a continuation of the Chevron B49 which had used the same monocoque as the non-ground-effect 1978 Chevron B45, so it was entirely unsuited for ground effects. For 1982, Robin Smith designed a completely new car for Formula Atlantic following the established template of a slim honeycomb monocoque with ground-effect sidepods, rocker arm front suspension and a single fuel cell behind the driver. The car was built at Nigel Dickson's workshop at Perseverance Mill (Westhoughton, Lancashire) and tested by Smith at Donington Park before making its first public appearance at the Formula Atlantic round at Mallory Park on 31 May 1982. It was run by Team Sanada for Masanori Sekiya, and Sanada's British F1 driver Tony Trimmer was on hand to advise on the car's development. After suffering a misfire at Mallory, Sekiya drove the B56 at the Silverstone and Aintree rounds, but the new car did not impress and Sekiya then transferred his Seiko sponsorship to the Ehrlich team to drive their second car.

Smith then took the B56 over to Ireland for the high-profile Formula Atlantic race at Phoenix Park at the end of August. Belfast driver Gary Gibson had been doing well in the Irish series with the Chevron B53, and he was keen to try out the newer car. However, after trying it in practice he decided it was unsuited to the bumpy track so raced his B53, leaving Smith to put some development miles on the B56, ignominiously finishing one place behind a seven-year-old Ralt. Gibson was then lured over to Scotland to try out the car in a libre race at Ingliston and had an encouraging run through the field to second place after being delayed at the start. The damp track may have disguised any of the car's shortcomings and made lap times meaningless. Gibson then drove the car at the Oulton Park round of the British series the following Saturday where he was able to take advantage of his experience of the car on a damp track to set the third fastest time in a wet qualifying session. After having to start from the back after arriving late to the grid, Gibson moved up to fourth place before his head gasket went. The car was then taken out to the Macau Grand Prix at the end of November, where Gibson qualified a respectable 11th and finished only one lap down in seventh. He then used the B56 in the Irish series in 1983 but Formula Atlantic fields were tiny and he was able to win his races easily.

What happened to the car after that is unclear, Chevron records saying it was sold to Mike Gue's Essex Racing in the US. Whether this was the car Paul Fostini bought from Essex Racing is unclear. At least two other monocoques were built, one of which was found in storage in England and another was used to build the later Chevron B64. 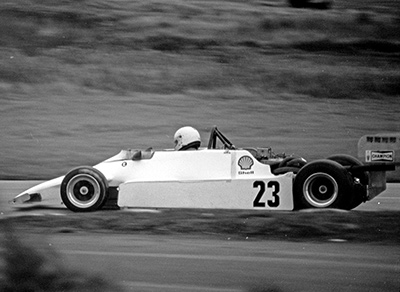 Gary Gibson in the Chevron B56 at Oulton Park in October 1982. Copyright Steve Jones 2022. Used with permission. 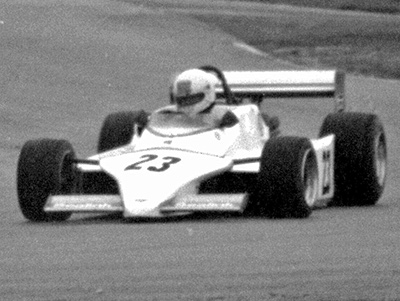 Gary Gibson in the Chevron B56 at Oulton Park in October 1982. Copyright Steve Jones 2022. Used with permission.

New to Team Sanada for Masanori Sekiya to drive in the 1982 British Formula Atlantic series. After just a few races, he moved over the the Ehrlich RP5A instead, and Robin Smith took the B56 to Ireland for Gary Gibson, who was then using the B53 with success in the Irish series, to race at Phoenix Park in August. Gibson soon decide the B56 was unsuited to the circuit and raced his B53, with Smith himself racing the B56. Gibson then came to Scotland to race the B56 in a libre race at Ingliston in October, and then drove it at Oulton Park a week later and at the Macau GP in November. He then raced it in the Irish series in 1983, after which it was not seen again. Chevron records indicate that it was sold to Mike Gue's Essex Racing in the US. Subsequent history unknown.

Paul Fostini recalls buying a new Chevron B56 via Essex Racing in Connecticut. He raced it once at Lime Rock, but was unable to get the car sorted. It was later photographed partly dismantled in Texas with the name Tom Watkins on the side.

Thanks to Tim Colman for sharing his notes on these cars, to Dave Taylor for background on the car's consruction, and to Steve Jones and Ian Lynas for the use of their photographs.