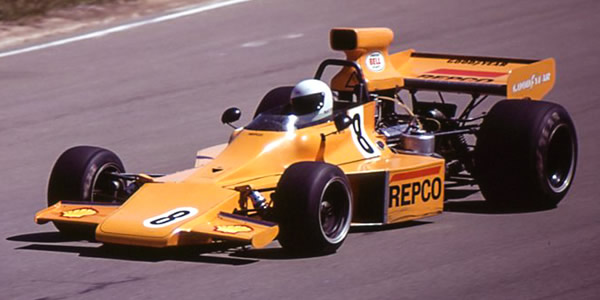 Frank Matich in the Matich A53, the seventh and last of his F5000 cars, at Adelaide in February 1974. Copyright David Mellonie (davidmellonie.com) 2018. Used with permission.

For much of the history of F5000, one car held sway. First the Eagle, then the McLaren M10A/B and later the Lola T330/332. But in between the McLaren and Lola eras, a number of marques had their moment in the sun: Chevron, McRae, Trojan, Surtees and, from Australia, Matich.

Australian engineer Frank Matich was a highly successful competitor through the 1960's and early 1970s and, from the mid-1960s, built his own range of sports cars and single-seaters. As well as a string of Australian sports racing titles, he won five Tasman Cup races and two Australian Grands Prix, as well as the 1972 Australian Gold Star title in his own F5000 Matich A50.

The Matich A series of F5000 cars started extremely well but were unable to retain their edge as the formula became increasingly competitive during 1972 and 1973.

The exact number of Matich cars built has been the subject of very heated debate. Despite claims that chassis 002 was a new car, it is now agreed by all involved that it was a renaming of chassis 001. This deceit was maintained for a very long time, and led to unnecessary unpleasantness.

If you have anything constructive to add on this subject, please email Allen at allen@oldracingcars.com. If you wish to rake over old disputes, please do it somewhere else.