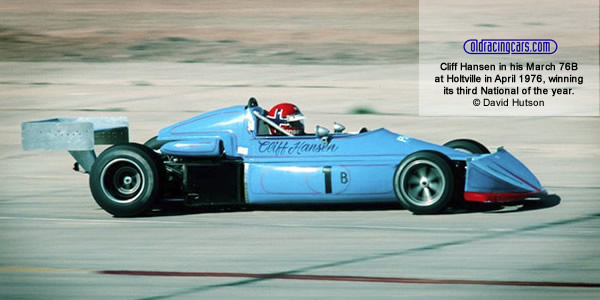 Formula B, as the SCCA still called its category for Formula Atlantic cars, boomed in 1976, encouraged by IMSA's decision to run a Pro championship that season. Northeast Division saw the biggest change, with the two-year-old cars that had won in 1975 swept away by an influx of new March 76Bs, Chevron B34s and Lola T460s. In California, both divisions were won by 1976 equipment: Cliff Hansen in a March 76B in the south and Steve Jizmagian with a Lola T460 in the north.

Bill Kneeland won SEDiv in a 1975 Chevron B29, and Robert Young won his third successive Midwest title in his 1975 Lola T360. John Kowalski was able to take Central Division in a 1974 Lola T360, as several drivers with newer cars focused on Pro Atlantic. The SWDiv title was shared by a couple of aged Brabhams.

At the Runoffs in October, the NEDiv rivals Ken Duclos and Bobby Brown were up against Jerry Hansen, who had a brand new Lola T460, Tom Pumpelly who had qualified in SEDiv despite spending the season with his March 76B in Pro racing, and Dorsey Schroeder, who had qualified in MWDiv in an old Brabham but had since bought a March 75B. These five were quickest in qualifying, ahead of Caifornians Cliff Hansen, Dan Marvin and Dennis Firestone, but the champions of MWDiv, SWDiv, NorPac, CenDiv and SEDiv were all well down the grid. Jerry Hansen led from pole position but went off track, allowing Bobby Brown into a lead he held to the flag.

The top three from each Division were invited to the SCCA Runoffs in November to decide a national champion.

From 1976 onwards, the SCCA made a concerted effort to collect and store the results of SCCA Nationals and Regionals, and this archive is now held at the International Motor Racing Research Center at Watkins Glen. However, the archive is incomplete, and we still need information for Gainesville Raceway 16 May 1976, Roebling Road Raceway 30 May 1976, Road Atlanta 18 July 1976, Charlotte Motor Speedway 29 August 1976, and Greater Southwest Raceway 19 Sept 1976.

Please get in touch if you have any programs, results sheets, grid positions or qualifying times from these races, or can help in any other way.