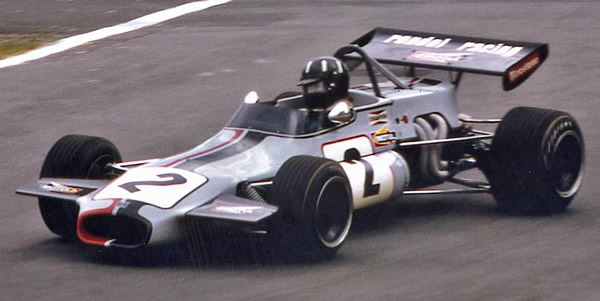 The Brabham BT36 was MRD's 1971 Formula 2 car, replacing the BT30. Most of the changes were those required by the new regulations, and the BT36 was only an evolution of the two-year-old BT30 design.

Leading BT36 drivers included Graham Hill and Tim Schenken for Rondel Racing and Argentinian newcomer Carlos Reutemann. Despite a win early in the season by Graham Hill, the BT36 was beaten by March's new monocoque 712M and the 1971-series Lotus 69 which also incorporated a monocoque centre section.  Brabham would move to monocoque construction as well for 1972.

These histories have been constructed by Andrew Fellowes with the extensive assistance of Bryan Miller, David McKinney, Allen Brown, Ian Henderson, Chris Townsend, Ted Walker, Jeremy Jackson, Steve Wilkinson, Philippe Demeyer, James Murray, John Turner, Dan Rear, Milan Fistonic and others. Much of the information was originally collected and discussed on a Brabham BT36 thread in the 10 Tenths Chassis Archive.

New to a new team, Rondel Racing, run by ex-MRD F1 chief mechanic Ron Dennis and ex-MRD F1 and Indy mechanic Neil Trundle, for Tim Schenken to race in F2 in 1971. Sold to dealer Bobby Howlings, and used by him in libre racing in March 1972. Then sold to Tate of Leeds (Racing) for Malcolm Wayne to race in Formula Atlantic, but leased to Graham Hill to use in the early F2 races at Thruxton and Hockenheim before his BT38 was delivered. Sold back to Howlings in May 1972, then to Arthur Moore for libre, but crashed on his debut. For Moore in libre again in 1973 with a Cosworth FVA engine, and in 1974 with a 1800cc Cosworth FVC. Then unknown for nearly two years before Howlings (yet again) raced it in Shellsport G8 in early 1976, again fitted with a 1800cc Cosworth FVC. To John Tait and used in Shellsport G8 in 1976 and 1977. To Eddy D'Hoe in Belgium in 1978, and hillclimbed with an FVA engine. To Regis Jumez 1980, and used in French hillclimbs. Later back via Howlings, who may have taken it back when he sold Jumez a Chevron B48, in 1984 to collector Anthony Mayman, then via John Harper and Ted Walker to Peter Williams in 1989. To Andrew Fellowes (Benowa, Queensland, Australia) 2002, then to Ian Rimmer in 2009.

New to Rondel Racing for Graham Hill and Bob Wollek to race in F2 in 1971. To John MacDonald (Hong Kong) for 1972, and fitted with a Hart 416 twin cam on carbs for Southeast Asian racing. To Eddie Marcello (Philippines) in 1973, and then to Rod Ocampo (Philippines) 1975, who last raced it in 1976. It then went to Romeo David in 1977, but the engine failed during practice and it did not race again. Later given to Louis Camus. Acquired from Camus by Leif Norberg, a Swede then living in Malaysia, in 1988, and it was restored for him in 1996 by Peter Denty Racing (Thetford, Norfolk). Sold to Andrew Fellowes (Benowa, Queensland, Australia) in 2004. To Alan Telfer in 2011. Raced by Telfer at the Phillip Island Classic Motor Races March 2013. Raced by Dean Tighe for Telfer at the HSRCA Summer Festival at Sydney Motorsport Park on 11-12 November 2017.

New to Bernd Terbeck (Hiltrup, North Rhine-Westphalia, West Germany) and entered for most F2 races in 1971, but often did not arrive, and only qualified for two races that season: Nürburgring in May, and a non-championship race at Hockenheim in October. Retained for 1972 and entered at Hockenheim in April, still fitted with its 1971 1600cc Cosworth FVA. Clipped by Bert Hawthorne's Tui during practice, triggering the accident in which the Kiwi was killed. The Brabham was heavily damaged but Terbeck was unhurt. The car was returned to England for repairs, and was offered for sale by Kaydon Racing (Cobham, Surrey) in August 1972. Returned to Terbeck who sold it to Heinz Stemmer (Münster, North Rhine-Westphalia, Germany). Later to Karl-Heinz Kühn, and then to Hans Peter 1984. Stephan Jocher bought the car from Peter in 1996, and had it for two or three years. It was next seen when raced by Willy Markwalder from 2002 to 2004. To Heinz Rolf Wisskirchen 2006. Then unknown again until raced by Armin Zumtobel in Historic F2 in 2018.

New to Rolf Stommelen as part of the Eifelland Wohnwagenbau (Caravaning) team for F2 in 1971. To Roland Binder (Esslingen, Germany) in F2 and hillclimbs in 1973. Later to Wittwer Racing, when the car had been modified with strange March bodywork, and sold to Ruedi Jauslin, then to dealer Fridolin Hämmerli. Then sold to Hansmarkus Huber who bought new Brabham bodywork from Peter Denty Racing; then sold to Albert Eggs, and sold by him to 'someone from Zurich'. Subsequent history unknown. A car with this number seen in 2003 with Sid Hoole and then in 2005 with Joseph (Sepp) Meyer.

New to F.I.R.S.T. for Peter Westbury to drive in F2 in 1971. Retained by Westbury early 1972 and then sold to Neckel 'Nick' Koob (Bettborn, Luxembourg) for French, Belgian and Luxembourg hill climbs from 1972 to 1974. To Johny Krier (Luxembourg) 1975 for French, Belgian and Luxembourg hillclimbs. Then to Roger Hennebert (Belgium) in 1977, then possibly to Marcel Tarrès in 1978, but its exact race results during this time are unknown. Then via four French owners until bought by John Beasley (Shrewsbury, Shropshire) in 1993. Sold to Abba Kogan 1998, and rebuilt on a new chassis. In 2007, the rebuilt car was sold by RM Auctions (agent Annette Abaci) to Thomas Steinke (Hamburg, Germany). Neither Abaci or Steinke were then aware of the car having a new chassis. The original chassis was later sold via Bonhams in 2008 and its current whereabouts are unknown. Meanwhile, the continuous entity of BT36-5 was raced by Steinke in European Historic F2 in 2008 and 2009 and sold to Francesco Molino (Pescara, Italy) in 2012. Then to Günter Türk (Freiburg, Germany) in 2013. Sold to Thomas Itte (Remseck, Germany) April 2014.

A second BT36 sold by Peter Westbury in early 1972, but borrowed back so he could race it at Thruxton in early April. It used the same identity as his BT36/5 which had already been sold. After the race, he handed the car back, and it was reportedly shipped to Argentina. The two cars had different Arch Motors numbers and any modern claimant to this identity will be identifiable from that number. 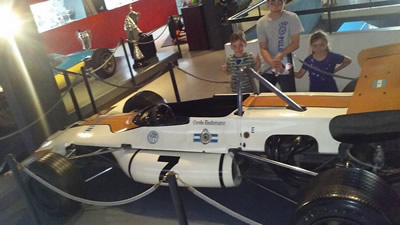 New to Automovil Club Argentina (ACA) for Carlos Ruesch to race in F2 in 1971. The car was reported to have been gone to a racing school in Argentina in 1972, but in 1974, the two ACA BT36s were reported to have been driven in local racing by Esteban Fernandino and Pablo Brea. In 2008, BT36-7 was on display in the Museo Juan Manuel Fangio in Balcarce, Argentina.

New to Archie Phillips (Belfast, Northern Ireland) in July 1971, and fitted with a 1790cc Cosworth FVC engine for use in Irish libre racing. Fitted with a new 1970cc Hart engine in May 1972, which made the car significantly more competitive. Raced by John Watson to win at Kirkistown in July, and by Jay Pollock to win at Kirkistown in September. Sold to Eddie Regan (Castleknock, County Dublin) for Irish libre in early 1973, now fitted with a 1930cc FVC. To Bob Leckie (Aberdeen, Scotland) in May, with the same FVC, and used by him very successfully in UK libre racing for the rest of the season. To Phil Barak (Whitley Bay, Nothumberland) for 1974, and again used in libre racing with a 1930cc Alan Smith FVC in 1974 and early 1975. Then reportedly sold to dealer Bobby Howlings in exchange for road car. Subsequent history unknown.

New to Rondel Racing for Bob Wollek to race in F2 in 1971. To John Kendall for Formula Atlantic in 1972, but leased to Richard Scott for the opening race of the F2 season, as his BT38 had not been delivered. Raced by Kendall until July 1972. Sold to José Araujo for British Formula Atlantic in 1973, but said to have been crashed at Snetterton. Ken Thorogood of Universal Racing Services (Wymondham, Norfolk) reportedly acquired the car in 1973, and although a lot of iits was sold off, the chassis remained stored with him until it was sold to Peter Denty (Thetford, Norfolk) in 2008. Restored by Denty between 2008 and 2010. To Klaus Bergs in 2010. Raced by Klaus Bergs (Korschenbroich, Germany) at the Spa Classic 2013. Raced by Bergs in the Historic F2 FIA International Series in 2016. Raced by Bergs at HSCC Silverstone 16-17 June 2018.

New to John Wingfield (London NW11) in September 1971 and raced in libre with a 1.7-litre Felday BDA. Raced in F2 in 1972 with Felday's 1973cc BDA and then converted to F/Atlantic specification for one race at the end of the season. Sold to Iain McLaren (Broxburn, Scotland) for 1973, fitted with a 1.8-litre Alan Smith Cosworth FVC and used for hillclimbs and libre. Advertised by MRE (Bourne End, Buckingham) in October/November 1973, who had a 1930cc Racing Services BDA in stock at the same time. Sold to Chris Choat and John Hardesty for 1974 and used in libre with a 2-litre Racing Services BDA. Retained for 1975 until sold in the summer to Nick Overall, still with the same RS BDA. To Mike Gue for 1976. Then to Ian Henderson who has retained the car.

New in July 1971 to Silvio Moser to replace his BT30. According to Moser's former mechanic, the car was "probably" sold to Hans Obrist at the ends of 1971 or early 1972 so would be the BT36 used by Hans Obrist (Schinznach, Switzerland) in Swiss national events in 1972. Last known when run by Obrist at the Lorentzweiler hillclimb in Luxembourg in April 1973. Then unknown from 1973 to 1977 but likely to be one of the as-yet unidentified Brabhams running in European hillclimbs. This is probably the car run in French hillclimbs by Michel Salvi (Malbuisson, France, very close to the Swiss border) in 1977, when it still had its 1600cc Cosworth FVA engine. Sold by Salvi in 1978 to Jacky Dalloz (Champagnole, France, not far from Malbuisson) and again used in French hillclimbs. Dalloz is believed to have crashed the Brabham some time around 1980, damaging the front of the car. The next owners were J Plante (Carcassonne, France, in the south of the country), then Alain Filhol (France) 1988 who had it restored by Simon Hadfield. Then to Ermanno Ronchi (Italy) 1992. It failed to sell at a Brooks auction in 2000 and next emerged with Andy Newall (UK) in 2003, having been rebuilt with a new Sid Hoole chassis, the original being retained. Sold to James Murray 2003 and rebuilt with the original chassis in 2006, the new chassis then being sold to Cornwall for a rebuild of a BT35. The BT36 was sold to Josef 'Sepp' Mayer (Heitersheim, Baden-Württemberg, Germany) 2008. To Luciano Arnold (Zurich, Switzerland) 2011. Raced by Arnold at the Donington Historic Festival May 2013. Raced by Arnold in green-and-white livery in 2014, 2015 and 2016. Raced by Arnold at HSCC Silverstone 16-17 June 2018.

Noritake Takahara raced his BT36 with a Mitsubishi Colt R39B engine in 1972, but changed to a Cosworth BDA for 1973. However, also in 1973, another BT36 appeared as a Bellco Racing Team entry with Mitsubishi Colt R39B engine for Kuniomi Nagamatsu. Yoshimasa Kawaguchi and Tomohiko Tsutsumi then had BT36-BDAs in 1974, but it is likely that one of these is an older BT30 updated. Kenzou Muromachi then drove this "extra" BT36 in 1975 and 1976. Subsequent history unknown.