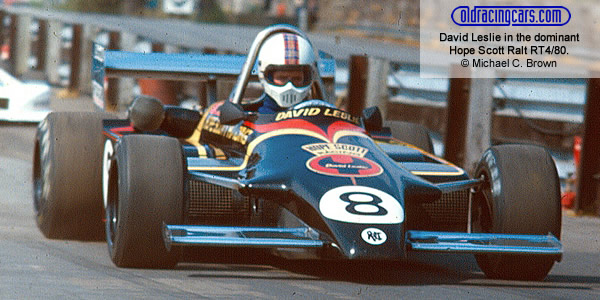 Despite "one or two problems in 1979", Hitachi continued their sponsorship of the series in 1980, and a 15-round series was announced, to be run by the BRSCC. David Leslie landed the plum drive for 1980, a brand new Ralt RT4/80 immaculately prepared by the Hope Scott Garage team, and duly dominated the season. He won 11 of the 15 races and set fastest lap nine times. Two new March 80As also appeared for the series, prepared by Colin Bennett Racing and driven by Bernard Hunter and Nick Adams but neither driver got any speed from the car and both quit before the end of the season. Alo Lawler also moved to a new car, swapping the reliable, well sorted, and quick Ralt RT1 in which Ray Mallock had won the 1979 series for a new RT4/80, but found the transition difficult and slipped back.

So second in the series was won by Phil Dowsett, taking the same 79B-updated March 782 that he had driven in 1979 to wins at Oulton Park and Silverstone. Ian Flux worked wonders with the Ehrlich RP5 that he had used in the New Zealand series at the start of the year and won the other two races.

For 1981, MCD intended to give Atlantic far greater promotion as the Aurora F1 series had been suspended (it would return in 1982). Also it was decided that only the Ford BDA would be allowed; as nobody had used anything else during 1980, this was not a major change. The North American series had adopted the same rule in 1977 but the New Zealand series still allowed different engines, Dave McMillan trying a Datsun/Nissan engine in his Ralt RT4 in January 1981.

The results here have been compiled by Chris Townsend using Autosport and Motoring News. Not all the results are complete: in particular one starter at Snetterton 14 Sep 1980 is not known. Full results sheets or details of non-starters are also needed for Mallory Park 6 Apr 1980, Silverstone 5 May 1980, Oulton Park 10 May 1980, Mondello Park 2 Jun 1980, Snetterton 14 Sep 1980 and Brands Hatch 19 Oct 1980.

Grid positions are known for about half the races but qualifying times are typically unavailable. Grid sheets or details of qualifying are needed for all races except Mallory Park 10 Aug 1980.

Chassis identification is possible the chassis plate observations of Adam Ferrington and others, Ralt production records and details of previous owners of second-hand cars (typically F2 cars which have been identified from F2 reports). The numbering of the Ehrlich RP5 and the Wimhurst are unknown but there are only a handful of unidentified cars: the March 742 of Geoff Byman, George Franchitti's March 79B, the March 78B or 79B (or 782) of Tony Westwood and Trevor Templeton's Chevron(s).