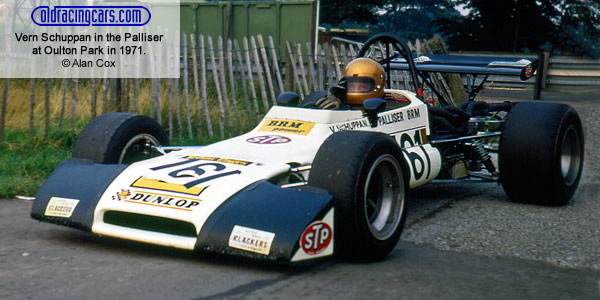 Although there was no lack of cars or engines, Formula Atlantic started slowly due to uncertainty over whether the new formula could succeed between F2 and F3. Formula Ford and F3 cars supplemented the grid at the first race and most of the cars this season were converted F2, F3 or even Formula Ford cars.

Yellow Pages sponsored the inaugural season and the championship became a battle between Vern Schuppan in the works Palliser and Cyd Williams in Graham Eden's Chevron B18C. Schuppan put together a string of first and second places and almost had the title in his pocket by September. Williams then won three on the trot but was too late the catch the Australian. Clive Santo and John Gillmeister also ran Pallisers but achieved little; with sales dwindling despite Schuppan's title victory, Palliser Racing Design folded early in 1972.

Brabhams were predictably the most numerous on the Atlantic grids and would have won any constructors title from Palliser, Chevron, March, Lotus and Royale by sheer weight of numbers.

Points table top five is from the John Player Motorsport Yearbook 1972, p291, with the remaining places constructed from race results.

The results here have been compiled by Chris Townsend using Autosport and Motoring News. Pat Sumner, who drove a converted F3 Kitchener throughout the season, supplied many invaluable organisers’ documents, including grid times and full results sheets.

Chassis identification is largely from details of previous owners of second-hand cars (typically F2 cars which have been identified from F2 reports), chassis plate observations by Adam Ferrington and others plus constructor production records for Chevron, March, Lotus and Royale. Palliser production records may still exist somewhere and copies would be most welcome. More details of the Kitchiner, Alexis, Huron, Hawke, Dulon and Titan would also be very helpful.