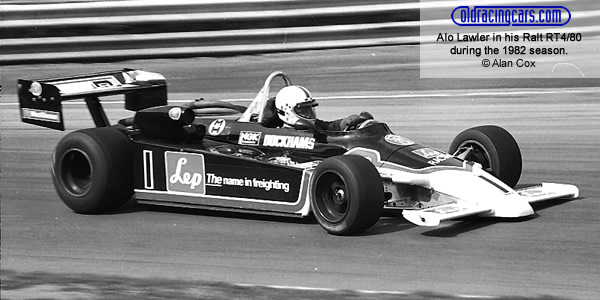 As the MCD's attention was absorbed with their "flagship" British Open Championship, the remaining Formula Atlantic competitors turned to the BRDC and BRSCC and lobbied them to run a Formula Atlantic championship for 1983. Alo Lawler returned with the Ralt RT4/80 with which he had dominated 1982 and was joined by former Ehrlich driver Ian Flux in Duncan Bain's Abdex Racing Ralt RT4/81 and Trevor Templeton with his RT4/82. Nobody else got a look in.

It was very tight between the three Ralt drivers and all had a chance of the title going into the last race. Templeton took pole position but then buzzed his engine. By mid-distance, Flux seemed to be in charge but a misfire allowed Lawler to take the lead, and retain his title.

It was a last moment of drama for Formula Atlantic in Britain. There would be no championship in 1984.

The points system was based on the traditional 9-6-4-3-2-1 system but added a point for fastest lap. To keep competitors from losing interest, additional points were given to each race starter on a rising scale, so 1 point for starting round 1, 2 for starting round 2, 3 for round 3 and so on.

The results here have been compiled by Chris Townsend using Autosport and Motoring News. Not all the results are complete: we have epecially limited knowledge of the race at Oulton Park on 23 July and we need grid sheets or details of qualifying for all races except Silverstone on 4 September.