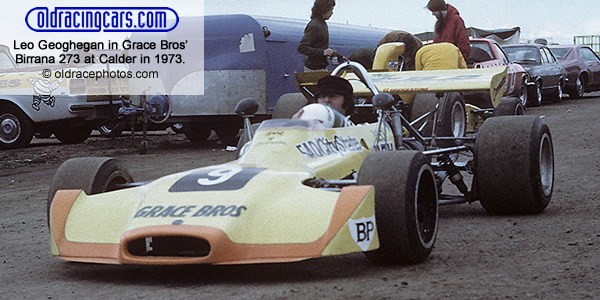 Leo Geoghegan dominated the 1973 ANF2 season in the Grace Bros Racing Team's Birrana 273, a new works car built for 1973 after the success of Birrana 272 raced by Mal Ramsay and by Geoghegan in 1972. His closest competitor was Bob Skelton in another new Australian car, the John Joyce-designed Bowin P6, but his Finnie Ford team did not complete the season. Tony Stewart had acquired the second works Birrana, the one in which Geoghegan had raced at the Singapore Grand Prix in April, but his funding also ran out, and he sold the car to Don Uebergang. Other new Birranas were sold to touring car driver Peter Brock, but he quickly lost interest in it, and to Bob & Marj Brown who entered their car for Enno Buesselman to drive. Mal Ramsay also drove a 273 at the Singapore GP, before that became Geoghegan's car for the ANF2 series. Elfin also had a new F2 design, the Elfin 622, but Mike Stillwell's prototype was the only one to appear in the series. The spaceframe 622 shared many of its components with the Formula Ford Elfin 620, and could not compete with the dedicated F2 designs.

The 1300cc Australian F3 also took off during 1973, with the three Cheetah Mk 4s of constructor Brian Shead, engine developer Brian Sampson, and Peter Roach dominating the series. Sampson had developed the 1166cc Toyota Corolla engine up to 1298cc for the F3 rules introduced in 1972, and another local man Peter Holinger provided the 5-speed gearbox. With 130 bhp available, the Cheetah-Toyotas could not compete with the leading F2 entries, but quicker than Formula Fords. Australia now had five racing car categories, 5-litre 'F1', 1600cc 'F2', 1300cc 'F3, Formula Ford, and Formula Vee, with the old libre cars having almost completely disappeared.

A "Pacific Formula" was planned for late 1973, with rounds at Suzuka on 3 Nov, Calder on 1 Dec and a New Zealand round later in the month. Although this would be for International F2 (i.e. 2000cc), a 1600cc class had wisely been added.

The 1973 AF2 results have been compiled by Allen Brown from Racing Cars News. Please Email Allen (allen@oldracingcars.com) with any further additions, corrections or comments.