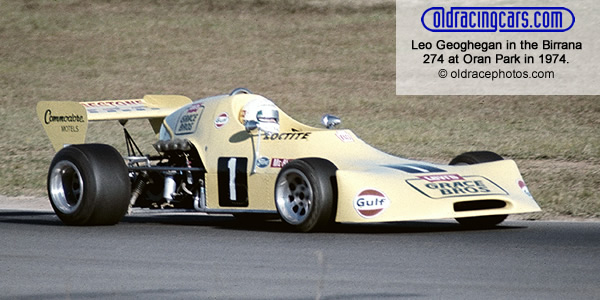 In 1974, the ANF2 series was boosted by a large injection of sponsorship from Van Heusen. The deal was secured by Hans Tiepermann who ran promotional activities for Grace Bros, one of Australia's biggest retail store chains, and owners of a prominent racing team. Tiepermann saw ANF2 as providing better racing than the F5000 series, and wanted to use the funding to promote Grace Bros team members through Formula Ford to ANF2 and beyond. The extra money led to a significant re-equipping of the top ANF2 teams, with new Birranas replacing the old Elfin 600s, March 732s arriving from England, and new designs emerging from Bowin, Elfin and Rennmax.

Leo Geoghegan started out as he ended 1973, winning the first two races in a new Birrana 274, but was chased hard by Bob Muir, who had started the season with a couple of guest drives in Rennmaxes, but then took over Bob & Marj Brown's Birrana 273 and won three of the next five races. Muir crashed at the last race, leaving Geoghegan to finish second and clinch the title.

The 1974 Van Heusen results were collated by Curt Bond from a wide rangle of sources.