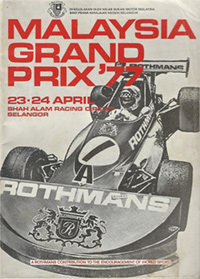 Graeme Lawrence still had his March 76B and Steve Millen had acquired the Chevron B35 that Rupert Keegan raced at Macau in 1976, but it was the old Theodore Racing March 722 that won the opening race of the Rothmans series, the Malaysian GP at Batu Tiga, in the hands of Teddy Yip's new F1 driver, Patrick Tambay. Millen was second, but Lawrence had fuel pump problems in that race.

Lawrence then won the second round at Penang, but the next two races were cancelled after the tragedy that occured at the Malaysian GP in April. During a support race, Harvey Yap's Ford Escort spun and hit a fence, tearing a stretch of it away. Five children were killed, and 23 others injured. The track was closed for some time, and the Selangor GP, due to take place there in September, was cancelled.

The Malaysian Grand Prix was run with three classes in 1977:

Formula Atlantic was included as it was due to be taking over as the National Formula for Malaysia in 1978, and had already been adopted by the Philippines.

The Macau Grand Prix was said to be running to Formula Atlantic rules, so presumably not the 4-valve rules that had been in force since the start of 1976, according to Autosport 17 Nov 1977 p6. Millen's series win was reported in Autosport 24 Nov 1977 p6

More help is needed - if you have results for these races, or if you owned one of these cars or raced in the series, please get in touch.