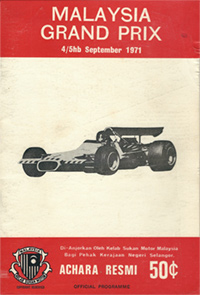 After several seasons of running to Formule Libre rules, the Southeast Asian races settled on a 1600cc 2-valve formula for 1971, matching the SCCA's and Canada's Formula B, but also the same as the rules being introduced for Australia's 'Formula 2' (ANF2) in 1972. In effect, this meant Ford's ubiquitous twin cam engine, and excluded both the 4-valve Ford BDA, which the British Formula Atlantic series had decided to allow for 1971, and Cosworth's older Formula 2 FVA engine, which had previously been raced in Malaysia and Macau by John MacDonald of Hong Kong and Hengkie Iriawan.

MacDonald fitted a Vegantune twin cam to his Brabham BT10 and took pole at the first event, the Singapore GP, but the race was won by Kiwi Graeme Lawrence in his ex-Formula B Brabham BT29, from Australian Johnnie Walker in his Elfin 600B. Lawrence won again a week later at the Selangor Grand Prix, then another Kiwi, Ken Smith, won the Penang Grand Prix after his cloest rival Sonny Rajah retired. MacDonald won the Malaysian Grand Prix later in the year before Malaysia's Jan Bussell scored a rather fortuitous victory at Macau in his McLaren after four cars ahead of him retired.

Race programmes from the region show that Malaysia's new National Formula also allowed single-seaters up to 1600cc in capacity and sports cars up to 2000cc. Unlike the single-seaters, which were only allowed 2-valve engines, sports car under 1600cc were allowed to run 4-valve engines allowing, for example, a Cosworth FVA in a Lotus 23.