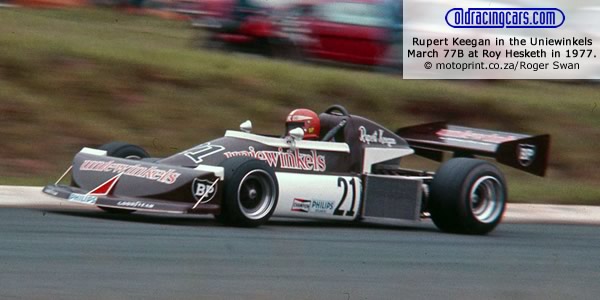 Champion Ian Scheckter went into 1977 as overwhelming favourite to retain his title. His dominance during 1976 had secured him a seat in the March F1 and he would have a new works-supported March 77B for the 1977 South African season. Also in March 77Bs were Ralt refugee Roy Klomfass and a guest driver, the British F3 star Rupert Keegan. Chevron had also organised a guest driver for their new B39, the Canadian and IMSA Formula Atlantic champion Gilles Villeneuve who, like Scheckter and Keegan, was tipped for a F1 ride in 1977. Chevron's local representation was led by Tony Martin in a second B39.

Scheckter's performances against the highly-rated Villeneuve and Keegan were hugely impressive, winning each of the opening three races from pole, and despite needing to miss several races because of his F1 commitments, he tied up the title with two races to spare. Roy Klomfass continued to impress in his March and such was the dominance of the 77B that two more were sold, to Alex Blignaut for Nols Nieman and to Bobby Scott.