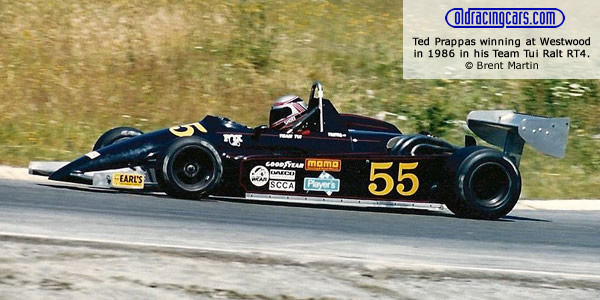 After a successful debut season in 1985, ECAR grew to nine races in 1986 and attracted some important young talent. Canadian Scott Goodyear had been making his way up through the SCCA ranks, impressing in Trans-Am, but this was his first season of professional racing. Englishman Calvin Fish had been through the traditional British ladder of Formula Ford and Formula 3, but his timing had been unfortunate, arriving in F3 at the same time as Ayrton Senna and Martin Brundle. Despite a win at Oulton Park, his F3 opportunites dried up and he moved to the US where some impressive drives in Vicki O'Connor's Pro Sports 2000 series in 1985 won him in a season in husband Bill's Formula Atlantic Ralt for 1986. Goodyear and Fish dominated ECAR in 1986: Goodyear winning six races to Fish's three, and Goodyear also took pole position five times. The Canadian attracted the attention of the CART teams and became Atlantic's first CART graduate since Michael Andretti in 1983. Fish stayed with the O'Connor's for another try at Atlantic in 1987.

Class B was won by R Peter Gates in his March 81A with three wins and two second places from six starts. However, it was Cliff Ebben in another 81A that deserved much of the credit as he was fastest qualifier in all five of the races he contested, failed to start one but won the other four.