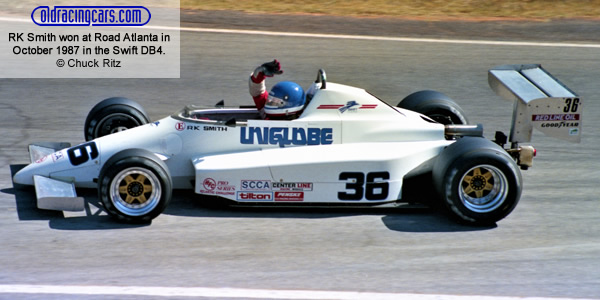 After three seasons of low-key recovery, Formula Atlantic re-emerged as a significant American category in 1987. After his strong performance in 1986, British ex-F3 driver Calvin Fish continued in the ECAR championship and acquired backing from championship sponsor HFC, allowing him a proper testing programme. Also staying from the top runners of 1986 were Floridian veteran Steve Shelton and Michael Greenfield, son of Can-Am racer Peter Greenfield, and these three dominated the season. Steve Shelton was generally acknoweldged as the quickest driver in either ECAR or WCAR, winning four pole positions, three fastest laps and three new laps records but he only won one race. In mid-season, Shelton got to drive the new Swift DB4 at Watkins Glen but the prototype's suspension broke and Shelton retired. With the points system rewarding reliability, Fish took over the championship lead and held it to the end of the year. HFC sponsored him for a move up to ARS in 1988.

The 1987 Ralt was not well received and most teams gave up on the new sidepods and fitted 1986 sidepods. This weakness was good timing for the introduction of the new Swift DB4, designed by Dave Bruns, and the slender new car was immediately competitive. After several years of gentle evolution of the RT4 package, Ralt anounced that the RT4/88 would be based on the newer RT21/RT31 F2/F3 design.

In 1987, three different categories were competing to be the main route to CART. Of these, Formula Atlantic remained the most junior, with Autosport's Dan Layton estimating that a budget needed to be successful in Formula Atlantic was about half that needed for Formula Super Vee or ARS. Nonetheless, the number of competitive cars was increasing: 62% of starters in 1987 were in one or two year old cars, compared with 48% in 1986 and just 12% in 1985.