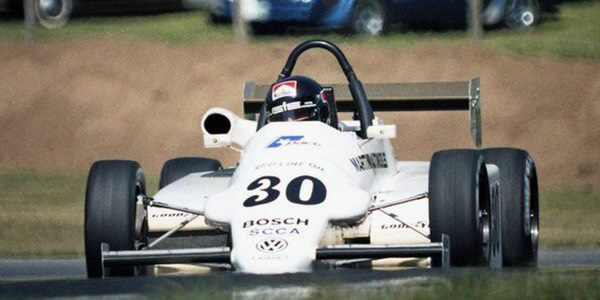 After years of domination of FSV, the interruption to Ralt hegemony came at Indianapolis Raceway Park in May 1986 with the arrival of Didier Theys' new Martini MK50. Theys had been on the pace with the MK47 in 1985 but the new car was even better and he won first time out. To add to Ralt's alarm, Johnny O'Connell's Anson SA6 was second and only one Ralt even finished on the same lap. And all four cars were equipped with Bertils engine, not the usual John Judd Brabham units. Theys rubbed it in with pole positions at each of the next three races and never qualified lower than third for the rest of the season.

But as Ken Johnson had shown in 1985, there was more to winning a SCCA championship than simply winning races. The SCCA's preferred points system was now the 20-16-14-12 system with points down to 15th position which hugely penalised a retirement. Despite Theys apparent dominance, Mike Groff led the championship table by eight points going into the last race and all he had to do was finish second to Theys to clinch the title. Theys duly won but Groff was beaten down into fourth by none other than Johnson himself, the 1985 champion returning to the series for the last three races in the same RT5/84 that he and Arie Luyendyk had won the previous two championships. So Theys was a very deserving champion and Groff suffered the double disappointment of losing both the FSV title and the ARS title.

Despite Theys' performances with the F3-derived Martini MK47 and the new purpose-built Martini MK50, winning five races, qualifying on pole six times and leading 36% of the races laps, only a handful of other Martinis appeared. Ralt's 1986-spec RT5 featured revised front and rear suspension but most runners preferred to use their 1985-spec cars. The Anson SA6 was sophisticated but not especially quick and Jim Griffith's GR-06 only had a handful of outings. Some variety of engine was also seen, with Bertil Sollenskog's engines powering Theys and Mike Groff, and Bob Morris's RPM motors in the back of Scott Atchison's car. For once, neither Ralt nor John Judd's Brabham-branded engines won the FSV title.

Fields remained very large, the average number of starters increasing from just under 27 to more than 28. Of those starters, 83% were in Ralts, 8% in Ansons and 5% in Martinis with the remaining 4% spread between an Argo JM12, Griffith, a six-year-old March, Ed Jones' Shannon AJ82V and a Venture GR06. A growing pressure on FSV and categories like it was that the number of companies capable of producing a competitive racing car was shrinking away and several of these were increasingly dependant on their domination of one or two categories. A successful new player could quickly put one of the existing giants out of business.

The results here have been compiled by Chris Townsend using US magazines such as SportsCar and On Track. The results are almost complete, just qualifying positions are missing for the Cleveland race. As usual, entry lists are also sought.

Ralt chassis records allow a lot of the RT5s to be identified and some US race reports of this period mention former owners of second-hand cars. Other identifications have been gleaned from SCCA logbooks for the cars that have survived.