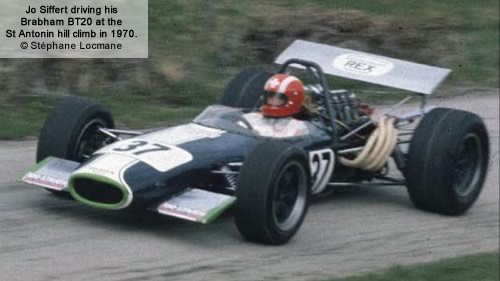 The Championnat de France de la Montagne started in 1967 but there was already a long tradition of course de côte in France. At first the championship was only for sports cars but it was soon opened to single-seaters and the title was won by F2 cars for nine successive seasons from 1969 to 1977. There was then a period of 19 years when it was won by Martinis, generally in BMW-engined F2 specification but nearly all custom built for hillclimbing, a parallel to Pilbeam's domination of British hillclimbing over a similar timeframe.

The best known champions have been Jimmy Mieusset, four-time champion in the 1970s, Marcel Tarrès, 11-time champion in the 1980s and early 1990s, and Lionel Régal, five-time champion before his death at Saint-Ursanne, Switzerland, in August 2010. The only champions to achieve wider fame were Belgian Hervé Bayard who competed in F5000 and in sports cars, and Guy Fréquelin who was second in the 1981 World Rally Championship two years after winning the hill climb title.

In the broader context of the whole website, the terms "hill climb" will be used to cover course de côte in France, Bergrennen in Germany and Switzerland as well as the gentler sport of hillclimbing in England. However, within the French hill climb area, the term course de côte will often be used.

These results have had to be collated from the French monthly magazine Echappement.

Please get in touch if you have any additional details from these events.

Chassis identities were hardly ever mentioned in Echappement and it was also relatively uncommon for previous owners of cars to be mentioned. So identifications are relatively rare in this section. What we do know comes disportionately from current owners and from FIA forms (typically from 1980s HVIFs). In some cases it is possible to extrapolate identities from knowledge of Formula 2, the European 2-litre Sports Car Championship and other series.